Two kickboxing veteran’s, Mikey Shields of Scotland and Belfast’s Aubrey Tarr will go through the ropes and face each other in a Full-Contact kickboxing match at the Clayton Hotel Belfast on the 23rd June 2019. The pair have over 200 fights between them, over their illustrious carries, and they’re not done yet. Shields & Tarr have fought in every combat systems from - K1, low-kick Full-Contact, light & Semi-Contact to boxing and MMA. 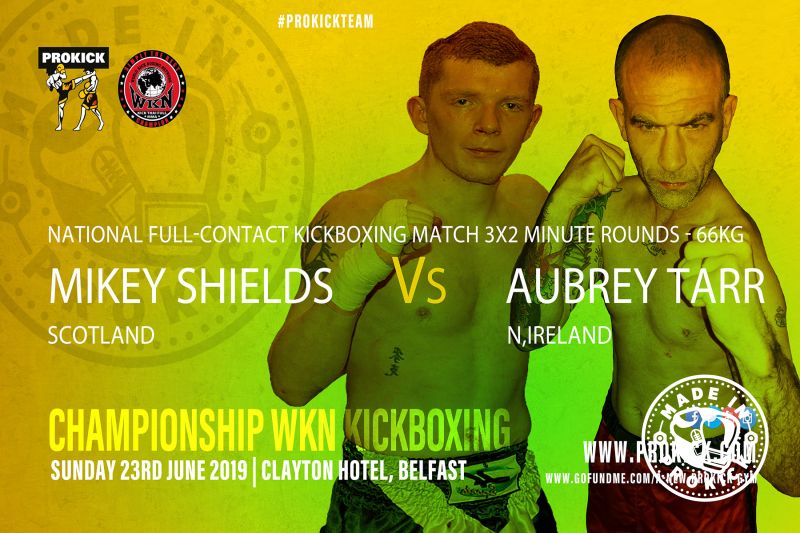 Scotland’s Mikey Shields and Belfast’s Aubrey Tarr will go through the ropes and face each other in a Full-Contact kickboxing match at the Clayton Hotel Belfast on the 23rd June 2019.

Shields Vs Tarr is a good Full-Contact match-up a 50/50 fight with the fight made at 66kg - punters say, whoever wants it more may just get the win, let's hope the two fighters do and we’ll be in for a cracking match.

#ShieldsVsTarr & The entire #ProKickteam will act as the supporting programme to the main event at the Clayton Hotel. That's where top of the bill match, Johnny ‘Swift' Smith (Bangor) will challenge Korean fighter Jihoon Lee for the WKN Intercontinental professional title. The pair will fight over 5 by 3-minute rounds for the vacant WKN K1 style Intercontinental divisions crown at 69.9kg.

Tickets are still available but limited.

Mikey Shields will go through the ropes with Aubrey Tarr