Salman Shariati (Belfast, ProKick) will finally be back in the ring to face tough Irish fighter Brandon Morrisey from the famous Billy O'Sullivan's Gym, in Waterford. The pair will go toe-to-toe at the Clayton Hotel on the 23rd of June. The match is made under K1 rules and set for 75kg over 3x2 minute rounds. Shariati Vs Morrisey will act as part of the supporting programme to #JohnnySwiftSmith challenge to Jihoon Lee from Korea. 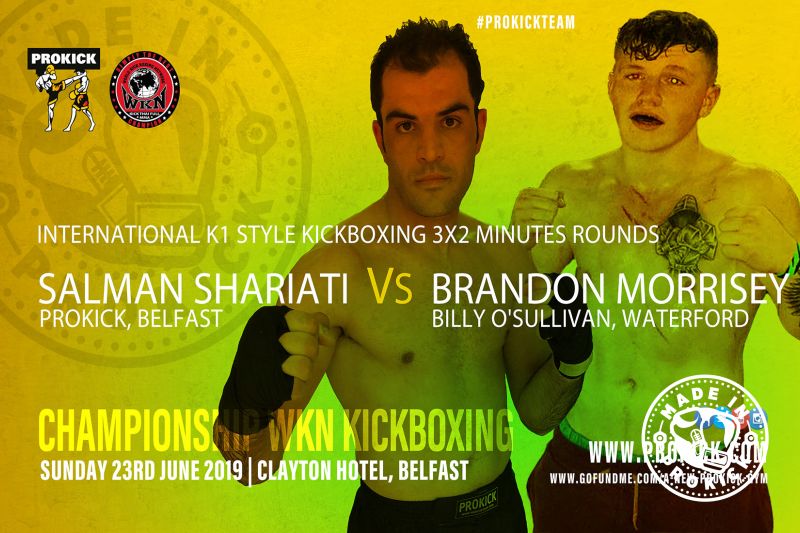 Salman Shariati (Belfast, ProKick) will face Brandon Morrisey from (Billy O'Sullivan's Gym, Waterford). The pair will meet at the Clayton Hotel on the 23rd of June. The match is under K1 rules and at 75kg over 3x2 minute rounds.

Salman Shariati is one of the three #ProKickTeam called the ‘Immortals’ Persian Warriors, Come see Salman, and the other two ProKick Persian team mates in kickboxing fight action at the Clayton hotel on Sunday, June 23rd, 2019.

The entire #ProKickteam will act as the supporting programme to the main event at the Clayton Hotel. That's when top of the bill match, Johnny ‘Swift' Smith (Bangor) will challenge Korean fighter Jihoon Lee for the WKN Intercontinental professional title. The pair will fight over 5 by 3-minute rounds for the vacant WKN K1 style Intercontinental divisions crown at 69.9kg.