It’s 4:30pm on a wet but nice March afternoon and while most of their classmates are happy to be home from school, three of NI’s young kickboxing talent have arrived to ProKick for their daily afternoon training session with head coach Billy Murray and World Title contender Johnny Smith. This is all part of their preparation for their return to Japan in March, having only been there back in December, the NI trio are heading back to the Land of the Rising Sun to compete in the ALL Japan K1 amateur tournament. 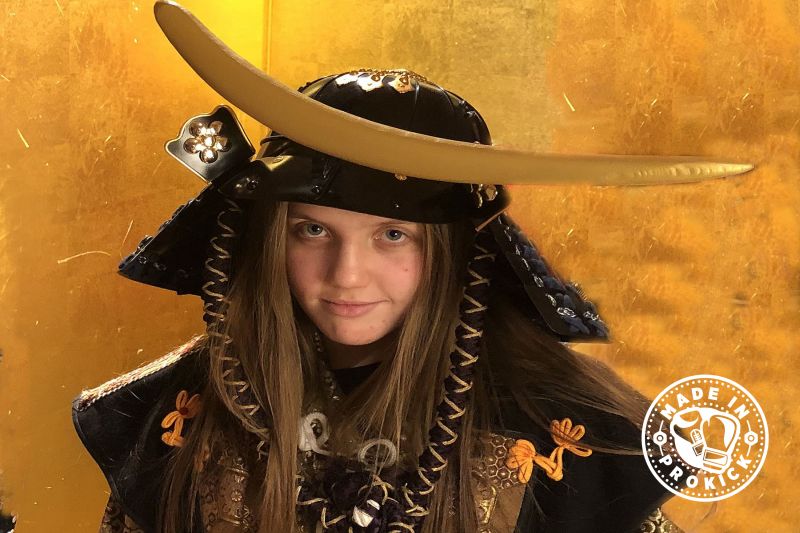 Female Samurai Grace Goody, 18, from Lisburn has been training in ProKick since she was six years old.

Grace Goody, 18, from Lisburn has been training in ProKick since she was six years old. She is first to arrive to the gym for training after a normal day at SERC Lisburn where she is studying for a Level 3 National Diploma in Sport, the college recognise her as one of their ‘Elite Athletes’ and allow her time to train, compete and recover alongside her studies. When asked about what she loves most about kickboxing, Grace’s eyes light up as she responds, “sparring and fighting. There’s nothing like that winning feeling.” She certainly has experienced plenty of that! Throughout her twelve years of kickboxing, Grace has travelled extensively with ProKick and The PeaceFighters organisation competing all across Europe; she has a plethora of gold medals from her three trips to the World Martial Arts Games that take place in Switzerland, as well as more gold from Malta, Scotland, Galway and more. In 2017, Grace travelled to Athlone to compete for the Irish Junior Schoolgirls title against local, Jade Molloy. She successfully added this accolade to her collection and is a regular fan favourite on ProKick’s home shows. The Lisburn lass is now ready to conquer Japan; the home of K1.

Back in December, Grace travelled extensively throughout Japan with teammates Jay and James under the tutelage of Billy Murray and Johnny Smith, they teamed up with Hiro Mochizuki who has set up a ProKick gym in his home town of Kumamotoafter returning from Belfast, where he studied English at Queen’s University and kickboxing at the infamous ‘tinhut’, ProKick’s HQ in East Belfast. This connection afforded Grace and teammates the opportunity in December to compete in the official K1 regional amateur championships in Osaka. It’s unprecedented for many westerners to compete and be successful in these championships but Grace did just that and got the victory. She reflects on that fight as “one which taught me a lot; I learnt how to calm my nerves! Mr Murray knows I get nervous and helped me, but being away from home I had to do a lot more myself to calm down. Also, I’m often a slow starter, but I knew I needed to be fast and effective from the first bell. I was really pleased with those changes I made.”

Once she was crowned regional champion, Grace was immediately invited back to compete for the ALL Japan title in Tokyo on 15th March, therefore the training hasn’t stopped. In the gym that afternoon, there is no doubt that Goody holds her own in the intense training that Billy Murray is putting them through. She is focused and motivated, making slight adjustments as she works the pads with Murray, her determination and drive is evident as she completes a tough strength and conditioning circuit, the only time she utters any displeasure is when it’s time for a run before the evening classes begin (which she will also take part in until 8:30pm). “I hate running,” Grace states, “but I know I have to do it, I just would much rather be hitting the pads.”

This time around the team won’t be travelling as much and will be based in Tokyo, something which Grace and her teammates, Jay and James are all looking forward to, as they hope to have the chance to explore the city once all their training and competition is done. Having the opportunity to visit and compete in Japan twice in four months is certainly life-changing, especially if Grace comes away with an ALL Japan title, something unparalleled for a Western female kickboxer to do…and at the age of 18! However, Grace has her feet firmly on the ground as when asked about her ultimate goal within kickboxing she responds, “I’m not seeing past Japan now, I know we have a home show in June in Belfast that I hope to be on and now that I’ve turned 18, I’ll hopefully be in the running to compete with some of WKN’s best amateurs, but for now, it’s putting my all into these next weeks of preparation and then making sure I perform at my best in Tokyo.” One thing is for sure, Grace’s mentality certainly speaks of all that she has learnt from kickboxing and ProKick’s ethos; hard work pays off. She recognises the sacrifices she’s had to make as a teenager training at this intensity, but the dedication she shows to her sport has helped her develop a strong character, whilst naturally shy, she is full of resilience and someone you certainly wouldn’t want to mess with!