An e-mail exchange that began over 16 years ago has turned into a lifelong friendship between Japan’s Hiro Mochizuki and Belfast's ProKick, Billy Murray. 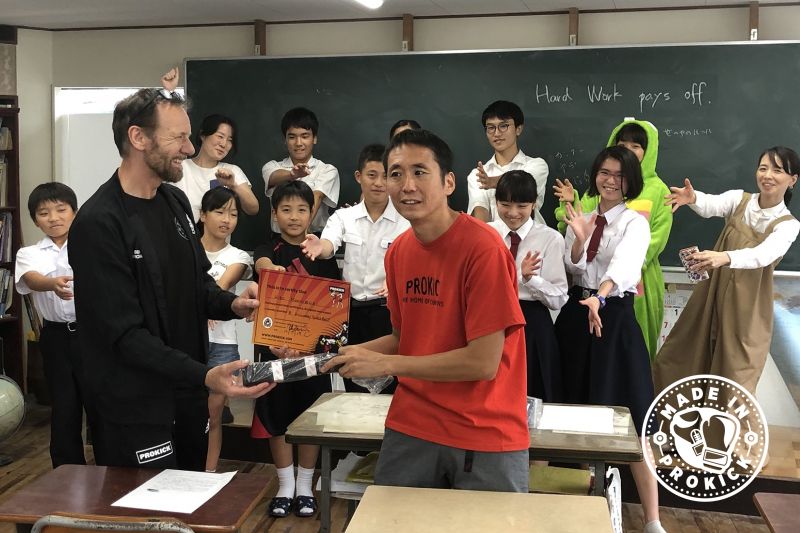 Kumamoto, Japan, July 2019 and my Hiro Is a ProKick Black Belt. In November 2002, Hiro moved nearly 6000 miles from his home in Japan to Belfast and began his two years of English studies complemented with his study of kickboxing.

A young student and boxing fan, Hiro was planning to travel to Dublin to study English at Trinity College. After searching the internet for boxing gyms he could train at while there, he stumbled upon the ProKick website, composed an e-mail wondering if anyone there had any links in Dublin and clicked send. Six months later, Mochizuki and Murray were still communicating back and forth via e-mail. Hiro’s plans were beginning to change. His intention to study English remained the same, however, Queen’s University now became more attractive given its Belfast location, and he no longer was searching for a boxing gym; kickboxing and ProKick became his home. In November 2002, Hiro moved nearly 6000 miles from his home in Japan to Belfast and began his two years of English studies complemented with his study of kickboxing.

Whilst in Belfast, Hiro gave himself completely to his training and embraced the ProKick motto of Truth, Discipline and Respect. A well-loved member of the gym, he was involved in all aspects; syllabus, sparring, fitness, fights. You name it, Hiro was there! He took part in a demonstration at the 10th anniversary birthday bash of the gym in the Hilton hotel in February 2003, a show topped by World Champion Gary Hamilton.

After completing his studies at Queen’s, Hiro returned to his native Kumamoto, Japan to teach English. That, however, did not end his link with ProKick. He has returned nine times in the last 15 years, often choosing to spend his holiday time in Belfast and at the gym! As you can tell his love of kickboxing runs deep. So much so that he set up his own ProKick gym back in his home town, reportedly much slicker than the infamous tin hut in Belfast!

Hiro’s desire centres around aiding and providing young, disadvantaged people (ThePeaceFighters) in his community with skills that will give them a step up in life. His successful English school does this in one way, and his gym does so in another. His commitment to both is second to none. A devastating earthquake hit Kumamoto in 2016 and destroyed Mochizuki’s school, in order to rebuild quickly, Hiro has given his life savings into re-establishing the school for the young people in the community. As if that wasn’t enough, he also runs ultra-marathons (that’s 4 marathons in one day)! The reason? To challenge himself, to test his mental strength. The same reason he loves kickboxing.

Recently, Billy Murray had the opportunity to visit and lead a seminar in the Kumamoto gym, whilst there he took the opportunity to surprise and award Hiro with an honorary black belt as way of recognition for his tireless work and commitment to the people of his community, for upholding the ProKick values and for his love and dedication to kickboxing.

Rumour has it that Hiro has already planned his 10th visit to Belfast. He’s after a retirement fight, and there’s only one show that he wants it to be on – Johnny ‘Swift’ Smith’s World Title event. He will be watching and waiting patiently for the result of the 26th October ‘Lord of the Ring’ final eliminator as Smith defends his WKN Super-Welterweight Intercontinental Title against his fellow country man Sone Shuhei. Chances are Hiro will be cheering for Belfast that day.

There’s no doubt that this man lives up to his name. A true gentleman and a shining light for ProKick 6000 miles away.

It’s been a long apprenticeship, Truth, Discipline & Respect - and 16-years later Japan’s Hiro Mochizuki is now one of the elite at Belfast's ProKick Gym, 'he is a BLACK BELTER'
Visit the Prokick Archive