Here are the results from ProKick’s involvement at World Martial Arts Games in Geneva 2018. Mr Carl Emery kicked off the #WMAG for another year. He brought a world of countries and cultures together under one roof to compete under in different styles of Martial Arts. And Belfast's ProKick team were honoured to be part of the #WMAG. ProKick travelled to Geneva with a 10 strong delegation and competed in various fighting styles…... 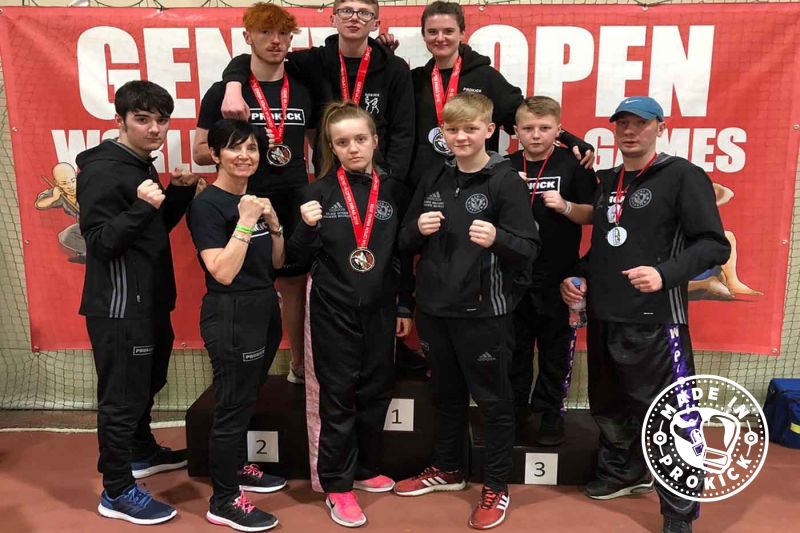 Pictured here are some of the Medal winners from #WMAG 2018

At the event #WMAG there was, Point fighting, light-contact fighting, full-contact and low-kick Style. The team had representation with members from as young as 12 years-old to up to 60 year-old Martial Art veteran. The #MadeInProKick team lifted 4 gold and 7 silver medals.

The giggling assassin, Grace Goody who weigh'd-in at 57.7kg had two tough fights and won both taking GOLD.
Grace is improving with every outing, said coach Murray. " She listens well reacts fast and trains so hard. We are expecting great things in the future from this 16 year-old. None of her achievements would be possible without the support of her family, and a massive thanks to Granny G."

Charles Ross made 72.5kg for his first full-contact match. But today fought under light-contact rules and although give over 10kg away in weight took GOLD
Jay Snoddon, a very confident 14 year-old punched the air when he came in at the required weigh of, 53.7kg. He received a bye into the final and faced an old adversery Phili Nowak from Poland. What a great match this was both boys skilful full of desire to win, Jay just had the measure of you Nowak and took the nod from the judges and the lifted the GOLD medal.

Lucy McConnell skipped up to the scales with a smile on her face to manage, 54.1kg for her first light-contact match. Who would have thought this smiles little actress had a fire dragon inside her. Three fights in one afternoon,first-up she fought a black belter from Germany lost on points in a semi-contact points fighting match. She fought the same German again under kickboxing light-contact rules and at the end of the fight the judges couldn’t split them and ask them to fight an extra round - Lucy lost 2 judges to one. The winner could not continue and Lucy found herself in a final against a London girl living and fighting out of Switzerland. This match Lucy give away close to 7kg and with that fire in her belly, Lucy did not stop punching & kicking right to the final bell in the last round... and Lucy took GOLD.

Father & Son duo, Jonny & Jack Wightman were last up to fight on day one. Jonny lost his first fight, the style was points fighting but loved it. In Jonny's second fight, he didn't get out of first gear and was just going through the motions as if in a light training session, the other fighter just wanted it more on the day. Well done Jonny, the quiet man Jonny was too quiet and lost out were he could have won.

Jonny's son Jack, looked a little nervous all weekend until it was his turn to fight. The 12 years-old was involved in an non-stop action-packed fight. At the end of the two round the nod went to the little French fighter. The referee was shocked and said, " he thought Jack should have had taken the win" but it wasn’t to be.  This was Jack’s first time away home home and on a big stage for this his first international light-contact match. Great opportunity for young Jack and his Dad Johnny and the team as a whole.

The event started at 11am and ran until 7pm then at 8:30pm there was a Saturday-night Fight Show with top professional fighters in MMA & kickboxing all featured on the night.

Other important members of the team who were not fighting this time around were: Granny Goody, Camryn Brown & James Braniff. Granny G was acting co-ordinator whilst Camryn was on the still camera and James was on video.

Check-out photos from the ProKick team @ the Gallery