TOMORROW SUNDAY 12 September 2021 will see a real fight club hit Belfast - The first rule of Fight Club is: You do not talk about Fight Club. The second rule of Fight Club is: We changed the First Rule and now we want you to scream & shout about this Fight Club at the warehouse. Tomorrow Fight-Club will hit Belfast September 12th. #KnockdownLockdown & Johnny Smith’s world title may have been postponed again by COVID restrictions - we at ProKick are fighting back against COVID with more than a basic 1-2 punch. We have managed to secure, two #WKN championship matches for the 12th September at 3pm and at a new location - at ProKick’s, soon-to-be new home, 2-6 Laburnum St BT5 5BD. 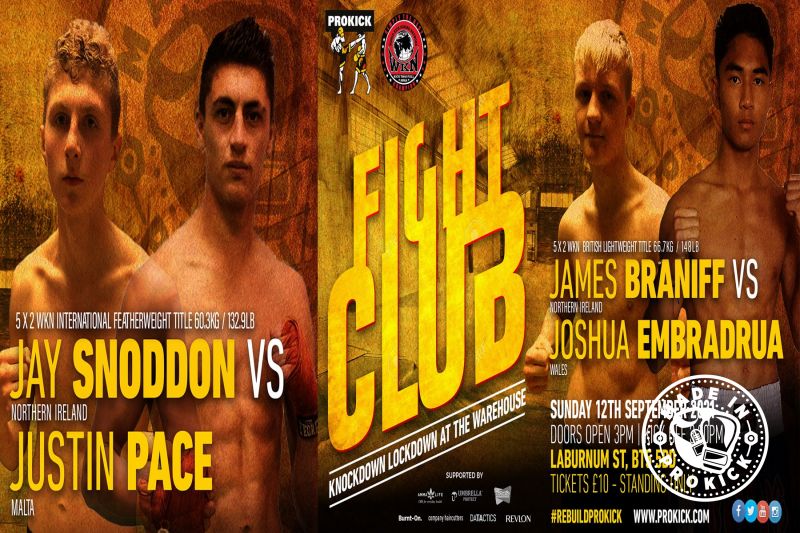 Fight-Club at the Warehouse is coming to Belfast on September 12th. We have two BIG WKN title fights with two of our three ProKick Samurai's

YES FOLKS, TOMORROW we will have the Battle of Britain with Holywood’s, James Braniff who steps back into the ring at Fight-Club to face talented Joshua Embradrua from Wales, for the WKN K-1 British 67kg title. This match is scheduled for five two-minute rounds of WKN-K1 kickboxing action. This will be an all-action-packed bout with both competitors hungry to succeed on the world stage. Prepare to be thrilled & dazzled by these two young men for the ‘Battle of Britain'.

The International WKN title match is back on with a change of opponent for Jay Snoddon. ProKick's young Samurai Jay-san was to challenge, Italian Ranieri Cingolanifor the 60kg WKN International belt on September 12th 2021 at the Stormont Hotel in Belfast. Covid restrictions and regulations has made that match a non-starter. The Italian coach, a single Vaxer needed to quarantine on arrival in Belfast and upon his return to Italy, this wasn’t feasible. ProKick scared the country for a suitable opponent and just yesterday (two weeks ago) secured a top 60 kg fighter from Malta. Justin Pace a 21year-old who has been training five years and is a Brown belt under world champion trainer, Master Noel Mercieca #TeamNoel Malta.

Billy Murray said: "I decided to postpone our Sold-out event, 'KnockDown LockDown’ - this event was scheduled to be at the Stormont Hotel set for Sunday September 12th 2021.
The event 'KnockDown LockDown’ has been moved until 27th November 2021 and at the same venue. (Read the reasons why the event was postponed) As you know the match between Johnny Smith vs Korean Champion Sunghyun Lee was set to be the biggest and most challenging match of Johnny Smith's fight career. Johnny is super focused and has a professional attitude, he will continue to work hard, honing his skills, preparing for his chance to challenge for the WKN world professional title.

A quick mention about our female ProKick Samurai, Grace Goody. Grace was also meant to be on the fight-card #KnockDownLockDown - but the Lisburn fighter, Grace, tested positive for Covid-19. The all Japanese champion, may have been floored but not counted out. Grace will be standing ringside cheering on her team mates. (wish Grace a speedy recovery)

If you have purchased a ticket for #KnockDownLockDown at the Stormont Hotel - All tickets will be transferred to our next scheduled date which is confirmed, Saturday 27th November at the same venue, the Stormont hotel.

Please join us at this unique event, two BIG WKN title fights and a 5 rounder with Johnny ’Swift’ Smith against five fresh opponents. This will be in the true spirt & style of 'FIGHT-CLUB’ - it’s standing room only at the warehouse for knock-out action, so join us to #KnockdownLockdown .