Jay Snoddon from Dundonald in Northern Ireland, is currently training for the biggest fight of his young career - he will compete for the WKN International Championship against Maltese, Justin Pace, Pace will come to Belfast with a good pedigree in the fight game, he comes from one of the best kickboxing gyms in Europe. Jay will join team James mates (listed below) in a unique fight shows to be staged in Belfast . 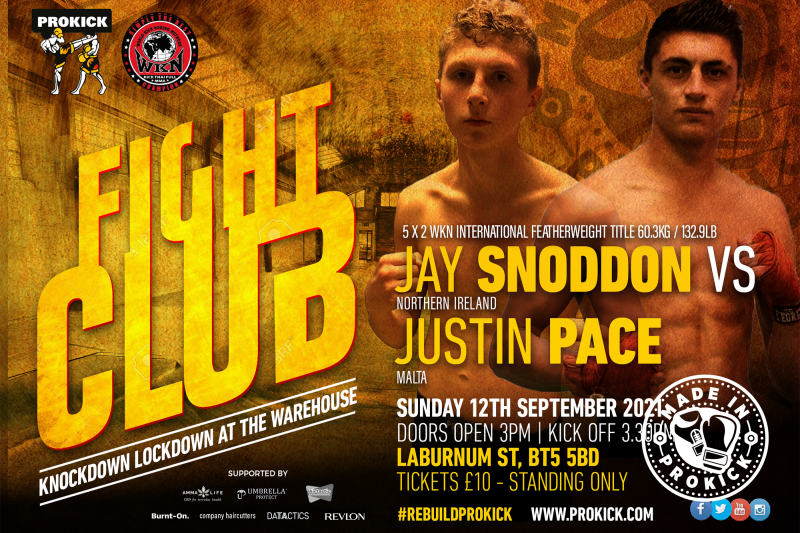 Are you ready for something to look forward to? Ready to say goodbye to lockdown life? Ready for a kickboxing show like no other? Look no further than ProKick’s #KnockdownLockdown !

An international kickboxing bonanza served with a side of sensational food will ensure that we well and truly come out of this lockdown feasting and fighting! Four WKN Championship matches all K1 style.

This long anticipated card will feature ProKick’s young samurais; James Braniff is set for his first WKN K1 British Title shot, Jay Snoddon will step through the ropes for a WKN K1 International Title and Grace Goody will go face to face with an experienced opponent for a WKN K1 European Title.

Book your e-ticket for Fight-Club - 'LockDown KnockDown' will be held at the Laburnum St on Sunday 12th September at 3pm - priced £10 each.

Supporters for #KnockdownLockdown
ProKick are delighted to announce that Datactics are back on board and investing in the next steps of the trio’s kickboxing career, along with Umbrella Protect Insurance - Company Haircutters - WKN - Airtastic - Revlon and just confirmed are another big supporter of ProKick and Johnny Smith, they are - Amma Life.
Other supporters will be added soon!