Battle of Britain in Belfast this September 12th

ProKick’s James Braniff will step back into the ring NOT at the Stormont Hotel but at Fight-Club at the WareHouse following an impressive 4-1 fight record in Japan. It's a change of venue but the opponent stays the same. He takes on another rising British talent from Wales, Joshua Embradrua. The match is scheduled for five two-minute rounds of WKN-K1 kickboxing action. This will be an action-packed bout with both competitors hungry to succeed on the world stage. 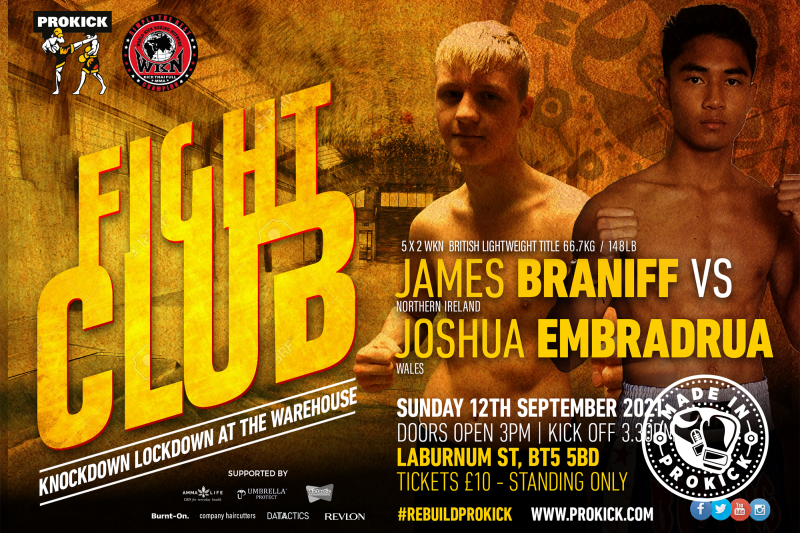 James Braniff will step back into the ring at Fight-Club at the Warehouse in Laburnum St. James faces a talented fighter from Wales, Joshua Embradrua for the WKN K-1 British 67kg title

The Battle of Britain will still take place on the 12th of September at Fight-Club in the WareHouse in Belfast.

New venue for the 12th September - Fight Club at the Warehouse

READ HERE for the change of Venue and event.

Billy Murray said today: "I'm currently looking for a match for Jay Snoddon for a British title shot or any fight just to keep him active and on form until the rescheduled date of 27th Nov this year. I'll also arrange some heavy sparring for Johnny Smith.

Grace is sill ill but hopes to be well enough to watch her team mates in action.

Because of costs incurred to stage this, by-way of, Doctors fee, ambulance, travel, hotel, etc - there will be a small cost on entrance £10 for adults and £5 for our ProKick Kids.

Are you ready to experience a truly spectacular small show? Then be at Fight-Club Laburnum St, Belfast on Saturday 12th September. Our talented teenagers will be making their hotly anticipated return to the ring in front of a select and limited home crowd. TICKETS for Fight-Club @ the Warehouse

ProKick are delighted to announce that Datactics are back on board and investing in the next steps of the trio’s kickboxing career, along with Umbrella Protect Insurance - Company Haircutters - Airtastic - Revlon and just confirmed are another big supporter of ProKick and Johnny Smith, they are - Amma Life.

Any businesses interested in helping to sponsor & support the show can request an advertisement pack from Billy Murray at billymurray@prokick.com

All proceeds from the event will go towards #ReBuildProKick