This month on 12th September 2020 marked a special anniversary for ProKick’s head coach, Billy Murray. 31 years ago, at the age of 31, he won his first World kickboxing title, taking the welterweight crown from the “unbeatable” American, Richard Hill. 31 years on, he is fighting and winning a different fight against the Coronavirus pandemic and building a new state of the art facility that will continue and increase the world renowned work that ProKick does. 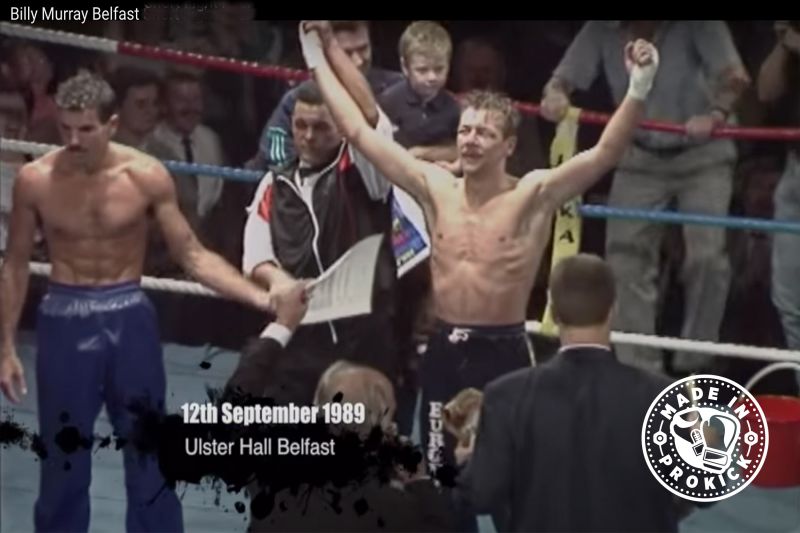 His story from a bullied schoolboy to his first amateur Ulster title in 1982 to then his first professional world title win in 1989 is similar to the journey he has been on recently to make sure the future of ProKick is brighter than ever. Having been beaten by Richard Hill previously, Murray wasn’t defeated. If you know anything about this man, you will know that he is not easily deterred. Becoming a world champion was his goal, and he wouldn’t let it go. When the opportunity to face Hill at a packed out Ulster Hall arose, Murray grabbed it with both hands. With his dogged determination and tremendous talent, Murray’s win propelled him to a glittering kickboxing career, picking up world titles at four different weights.

Now in 2020, in a year like no other, he has used that same dogged determination to fight back against the hurdles that the Coronavirus pandemic has raised. With the plans for the new ProKick gym underway with Urban Villages, suddenly the world was thrown into lockdown and everything paused. But that would not deter Murray from continuing to pursue his dream of building a state of the art kickboxing gym in the heart of East Belfast. The infamous “tin hut” of Wilgar Street has produced a plethora of World, European, intercontinental and national kickboxing champions for close to 30 years, yet the facilities have certainly been far from world class. Murray has tried for years to secure funding for new facilities, he has had detailed plans drawn for a new build at the current Wilgar Street site before that all fell through at the eleventh hour. But remember, this is a man who no matter what, doesn’t let go of a goal. Coronavirus could not compete with Murray achieving that dream with the help of Urban Villages. The design team have embraced the ProKick spirit and have worked throughout lockdown with many meetings taking place via Zoom finalising the plans which were submitted in August. The programme of works released alongside the plans reveal that ProKick will be in their new state of the art gym on Labernum Street, this time next year.

What Billy Murray and ProKick has achieved over the past 31 years is quite remarkable. He has combined winning world titles with promoting numerous LIVE televised events from Belfast, training thousands in the sport of kickboxing and guiding countless people to a healthy lifestyle; mind and body. He has accomplished all of this without, or little to no official funding. Throughout the early 80’s & 90s, Northern Ireland was making the news across the world for all the wrong reasons, however Murray’s name became synonymous with hope for this island. His kickboxing events encouraged fight fans to visit even in the midst of the Troubles, reminding the world that there was still a good news story to be written, while the ProKick gym provided a welcome refuge from the ongoing atrocities. Politics and religion were forgotten upon entering the ‘spit and sawdust’ gym, the sport of kickboxing ‘the ProKick way’ became the uniting force.

That still remains true today. ProKick’s motto of ‘Truth, discipline and respect’ stem from Murray’s own lifestyle. At 62 years ‘young’, he is still the same weight as he was when he stepped into the ring against Richard Hill 31 years ago, runs 30 plus miles per week, takes up to 20 classes a week and puts ProKick’s current crop of champions through gruelling training sessions on a daily basis. Year after year, ProKick continues to provide hope and inspiration for the community. Murray remains confident that kickboxing continues to provide something which everyone needs in 2020, “there’s so much stress associated with life today, when people come through the doors of the gym, they can drop all of their stresses and baggage and put their energy into training. There’s also so much concern around young people and too much screen time, yet we have teenagers who spend hours each day training and integrating themselves into a team and community here at ProKick.”

31 years on, Murray is still intent on producing good news stories from Belfast. Sit down with him for a cup of tea or more likely, his favourite bowl of porridge and he will recount copious stories of lives positively impacted through kickboxing. None more so than three talented teenagers, Jay Snoddon, Grace Goody and James Braniff, who travelled to Japan in December of 2019 and March 2020 competing in the K-1 amateur championships. This once in a lifetime opportunity also included them visiting the British Embassy in Tokyo and meeting with Invest NI representatives in the city. This was certainly an enriching and cultural trip for our three warriors, one which will live long in the memory of these three young students of Murray. Grace Goody was crowned K1 amateur kickboxing champion, a first for a female outside of Japan. James Braniff was a close runner up in his final and Jay Snoddon avenged his last Japanese outing with a points win over a tough opponent.

When Murray stepped into the ring for his world title shot back in 1989, he was 31 years old, these three young fighters are 17 and 18 years old, and have the kickboxing world at their feet under the guidance of coach and promoter Murray. This certainly wasn't his experience as he trained alone, organised and promoted his World Title fight alone, and with no coach stepped into the ring alone. What an inspiration for the three Japanese samurais who have none of that to worry about and can focus and dedicate themselves to their training.

As they made their way home from Japan in early March, it became clear that they were coming back to a very different Northern Ireland. Schools were closing, shops were closing and the gym was also closing. Lockdown had begun. No time to celebrate, no time to share stories, no time to recognise the enormous amount of hard work that Grace, Jay and James had invested in this part of their journey. Until now…in the same vein as Murray, they refuse to be deterred by the Covid-19 pandemic and are preparing for the ProKick Spooktacular formal dinner show on 31st October 2020 in the Stormont Hotel, Belfast. Each of them will fight for a championship title and as teenagers. Imagine what they will have achieved by the age of 31.

Over the last 30 years, the achievements and accomplishments of ProKick and Billy Murray have been vast. No matter what life throws up, the ProKick spirit remains “Truth, discipline, respect.”