Jay Snoddon, from Dundonald is the youngest of our three ProKick Samurai's - at16 year-old he has been training in ProKick for the last three years. Upon first meeting, you’re unlikely to pin Jay down as an up and coming young kickboxing talent – a quiet, well-mannered young man he is currently studying at Belfast Met for an Active IQ Level 3 Certificate in Personal Training. 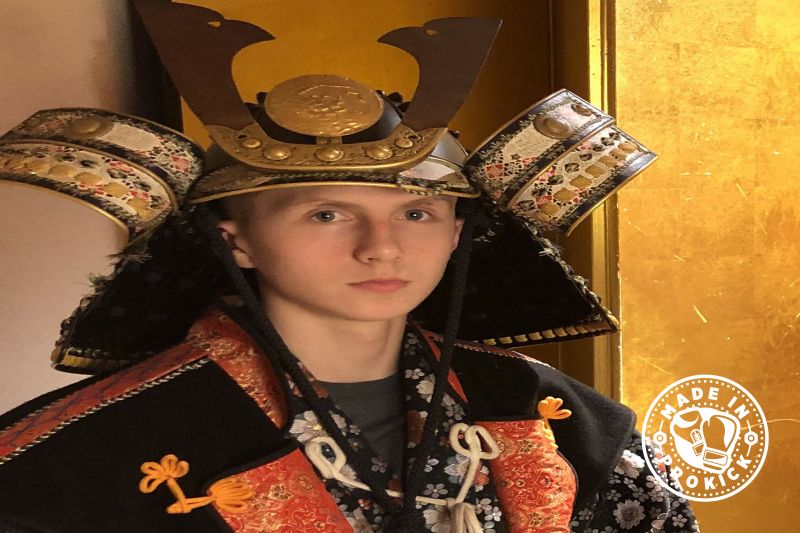 Samurai Jay, a quiet, well-mannered young man he is currently studying at Belfast Met for an Active IQ Level 3 Certificate in Personal Training.

Jay arrived at the gym after having competed at the Ulster Schools Cross Country finals at Mallusk, running a personal best time over four miles in difficult conditions. His reward? An intense afternoon of strength and conditioning circuits and pad work with Billy Murray, punctuated with a bowl of porridge, before another run and then joining his normal evening kickboxing classes at 6:45pm. When asked why he began kickboxing, Jay mentions the infamous Conor McGregor who lots of his peers looked up to at the height of his UFC career, however, Jay was particularly interested in the striking game of McGregor and began to research local boxing and kickboxing gyms. He came across the ProKick website, watched a short highlight reel of Head Coach Billy Murray and immediately told his dad that he wanted to give it a go. From the opening night of his six week beginner’s course, he was hooked.

From the beginning, Jay was keen to step inside the ring, and states that “it’s the competitive side of kickboxing that I enjoy the most. Going up against a tough opponent who has trained as hard as me, stepping through the ropes to give my all; my heart, my soul, my skill and demonstrating all that I’ve got.” In three short years, he has travelled to Malta, Switzerland, England, Scotland and throughout Ireland competing in the sport of kickboxing.

Back in December, Jay travelled extensively throughout Japan with teammates James and Grace under the tutelage of Billy Murray and Johnny Smith, they teamed up with Hiro Mochizuki who has set up a ProKick gym in his home town of Kumamoto, after returning from Belfast, where he studied English at Queen’s University and kickboxing at the infamous ‘tinhut’, ProKick’s HQ in East Belfast. This connection afforded Jay and teammates the opportunity in December to compete in the official K1 regional amateur championships in Osaka. Jay came up against a very tough and experienced opponent, it was a close contest and the decision went the way of the Japanese. After the fight, Jay spoke respectfully about his opponent, something that ProKick instills in these young warriors. Head Coach Billy Murray said of that experience, “I knew that he was disappointed, but he spoke well of his opponent, I could tell that it was eating him up but he didn’t let that show and on our first day back home he was back in the gym working hard. He has the right mindset of a martial artist.”

With an extremely mature outlook, Jay admits that he learnt more about himself from that loss than any win would have brought him. He recognises that his mentality has shifted; staying grounded, humble and focused will certainly help him achieve his goals going forward. Even though he didn’t win in Japan the K1 organisation were impressed by Jay’s performance and invited him back to compete in Tokyo. He hopes this will give him the opportunity to prove to both the official K1 team and his head coach Billy Murray, who he says “has given so much time and effort to me”, that he is able to compete at that level amongst the top fighters. Aside from the competition, Jay jokes that he is looking forward to trying out some of the unique cuisine that Japan offers, whilst there in December, battered octopus was something the Dundonald lad will never forget being on the menu and who knows what it will be this time!

Kickboxing has obviously given this young man plenty of opportunities to travel, but that’s not all. He believes it has changed his life completely, “I used to just sit on the Playstation all day and drink Coke. Now I get up at 6am and run, eat well, and train every day. Not only that, I’ve met so many new people and become more confident, the benefits have been endless.” Once he returns from Japan this time around, it’s likely that Jay will be back in the gym straight away as he has his eyes on the ProKick King of the Ring show on 6th June in the Stormont Hotel. This show sees professional World Title kickboxing make a return to Belfast as Johnny Smith fights for the WKN Super-Welterweight World Crown. Snoddon is keen to fight on this card again displaying before the kickboxing world that he is definitely one to watch. He hopes one day to emulate his stablemate Smith’s success. “I want to be at the pinnacle of this sport, to work my way through the amateur ranks, gain amateur world titles, turn professional and establish myself as the best at that level. Then who knows? Glory Kickboxing is the number one in this sport and one day I’d like to see myself there.” This is certainly not an apathetic, demotivated and unfocused teenager! With his sights and ambitions high, who knows where we will see the name Jay Snoddon in the future?