Two of the Nations top female high kicking teenage champions will go head-head on June 23rd at the #ClaytonHotelBelfast at #BillyMurray s International #ProKickEvent. Recently crowned Jnr world champion, Molly Concannon who fights out of Kombat in Derry / Londonderry will face Jnr Irish title holder Grace Goody fighting out of the #ProKickGym - The match will be over three rounds in a K1-Style kickboxing bout 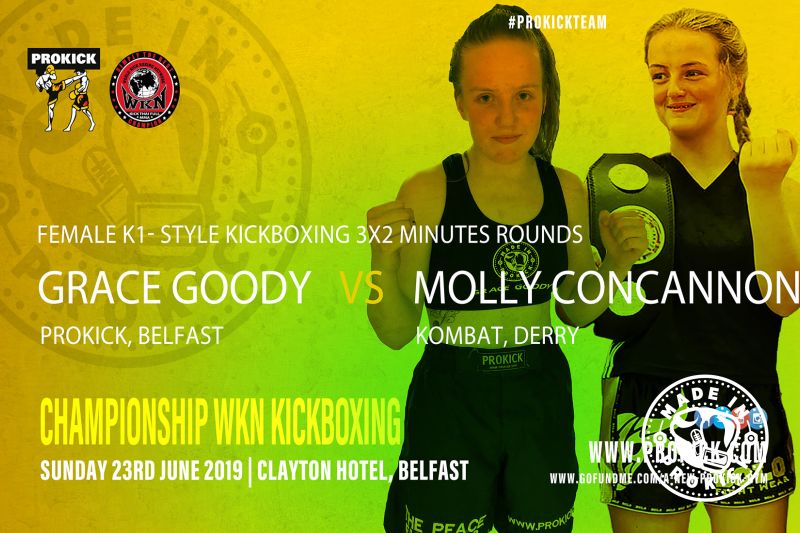 'The battle of the teens' has the making of a show-stopper as both camps believe in their young protege’.

“ This kid is something special! I’ve coached professional fighters in full contact and K1 and I’ve never seen anyone with the power and determination as this girl”

Carian added, Molly came to Kombat with a fantastic record of 8-2, credit to her previous coaches, but with some fine tuning from her striking coach Kevin Anderson, he truly believes she is the best 58kgs junior in Ireland."

Kevin finish off by telling us “This kid is something special! I’ve coached professional fighters in full contact and K1 and I’ve never seen anyone with the power and determination as this girl”

Molly took part in the WKU Junior World Cup in May, despite her Danish and English opponents pulling out she fought her fist low kick bout. Molly adapted well and claimed the coveted WKU World Title.

This will be an interesting match-up said Billy Murray the promoter and coach to the #ProKickTeam:

"I’d like to thank the Kombat team for excepting the match between Molly & Grace. The girls have similar records with Grace 7-0.
I know how hard Grace trains and would have no hesitation in pitching her up there with any teenage, not just in Ireland but anywhere in the world."

The entire #ProKickteam will act as the supporting programme to the main event at the Clayton Hotel. That's when top of the bill match, Johnny ‘Swift' Smith (Bangor) will challenge Korean fighter Jihoon Lee for the WKN Intercontinental professional title.

The pair will fight over 5 by 3-minute rounds for the vacant WKN K1 style Intercontinental divisions crown at 69.9kg. The Sunday afternoon Fight-Special at the Clayton Hotel in Belfast will see old favourites as well as a new exciting team of newbies who will bring up the rearguard.