JAY SNODDON a schoolboy by day, but by night an International kickboxer. The 16 year-old from Dundonald will step through the ropes on Sunday, June 23 at the Clayton Hotel in Belfast for another International low-kick style match against Syrian born Raafat Kojok, now living and fighting out of Dublin. 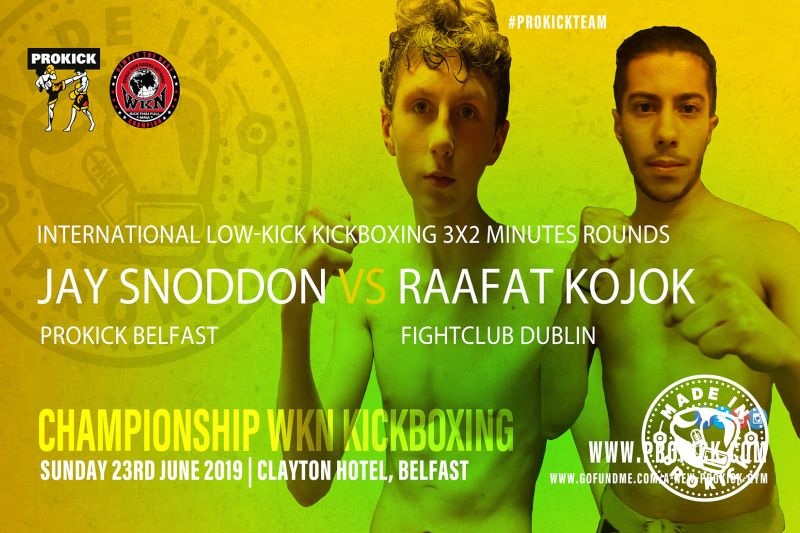 Jay Snoddon (Dundonald, ProKick) will face Syrian born Raafat Kojok who now fights out of (FightClub, Dublin) on June 23rd at the Clayton hotel in Belfast

The young rising star, Jay Snoddon and the #ProKickTeam will act as the supporting programme to the main event at the Clayton Hotel on June 23rd. That's when top of the bill match, Johnny ‘Swift' Smith (Bangor) will challenge Korean fighter Jihoon Lee for the WKN Intercontinental professional title. The pair will fight over 5 by 3-minute rounds for the vacant WKN K1 style Intercontinental divisions crown at 69.9kg.

Snoddon's coach, Murray said: " This will be young Jay Snodden's toughest test to date but the young 16 year-old is truly up for the challenge. Raafat maybe older and more mature but Jay is a great hard working student with a solid team behind him. He'll treat this fight the same as every other opponent he's faced, with confidence but with respect."

Raafat Kojok now fights out of FightClub, Dublin - under the direction of Ken Molloy a renowned kickboxing coach.