James Braniff, 17 , from Holywood fell out of love with rugby three years ago, however his father encouraged him not to give up on sport completely. Little did they know that while studying for his A Levels at Sullivan Upper, James would also be setting Japan alight with his kickboxing prowess. 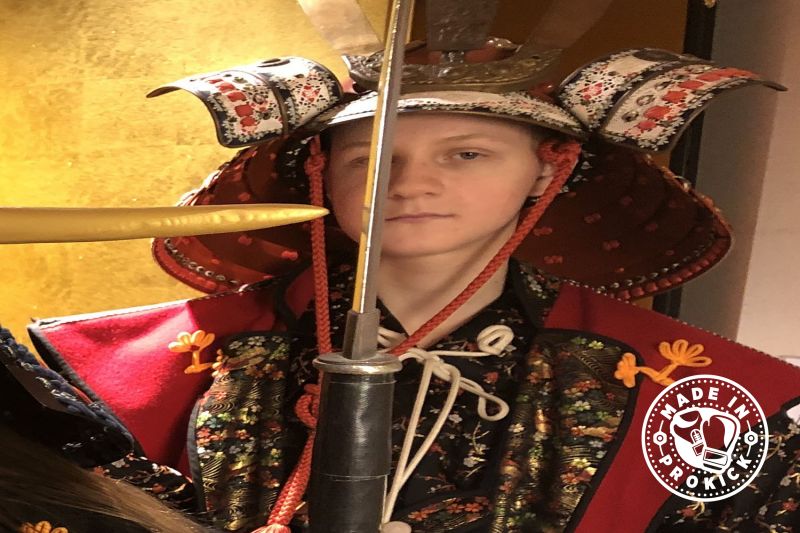 James Braniff is six foot tall (and still growing), James is a gentle giant, he speaks confidently and is relaxed amongst his teammates.

James arrives to the gym straight from a dental appointment, with no sign of self-pity he begins a tough strength and conditioning circuit, including one to one work with Head Coach Billy Murray on the pads. At six foot tall (and still growing), James is a gentle giant, he speaks confidently and is relaxed amongst his teammates. That is until training begins…his strength and stature are immediately evident as his strikes kicks echo throughout the East Belfast gym as he makes contact with the pads and punch bags.

From the beginning, Jay was keen to step inside the ring, and states that “it’s the competitive side of kickboxing that I enjoy the most. Going up against a tough opponent who has trained as hard as me, stepping through the ropes to give my all; my heart, my soul, my skill and demonstrating all that I’ve got.” In three short years, he has travelled to Malta, Switzerland, England, Scotland and throughout Ireland competing in the sport of kickboxing.

Back in December, James travelled extensively throughout Japan with teammates Jay and Grace under the tutelage of Billy Murray and Johnny Smith, they teamed up with Hiro Mochizuki who has set up a ProKick gym in his home town of Kumamoto. Mochizuki returned to Japan from Belfast, where he studied English at Queen’s University and kickboxing at the infamous ‘tinhut’, ProKick’s HQ in East Belfast. This connection afforded James and teammates the opportunity in December to compete in the official K1 regional amateur championships in Osaka. It’s unprecedented for many westerners to compete and be successful in these championships but James did just that and got the victory. He reflects on that fight as “my favourite one to date. It just felt as though everything came together while I was in the ring. All the hard work and preparation merged into a performance and a result which I’m extremely proud of.”

Japan isn’t the only country that James has travelled to showcasing his kickboxing talent, since beginning three years ago he has competed in Malta, Switzerland, Scotland and across Ireland with an array of medals and trophies to go along with the lifelong memories. These opportunities aren’t something that Braniff takes for granted, in fact, these world-wide trips are the thing he cites as “being the best about kickboxing. I’ve travelled so much and experienced so many different cultures in the last three years all because of this sport.” This certainly wasn’t what him or his father were expecting when he signed up for a six weeks beginners course back in 2017 in order to ensure he had some form of exercise!

This time around the team won’t be travelling as much and will be based in Tokyo, something which James and his teammates, Jay and Grace are all looking forward to, as they hope to have the chance to explore the city once all their training and competition is done. When asked what stood out to him about his time in Japan he states, “they have a real culture of cleanliness, it’s certainly something I’d love to see us embrace back home.” Having the opportunity to visit and compete in Japan twice in four months is certainly life-changing, especially if James comes away with an ALL Japan title, something unparalleled for a Western kickboxer to do…and at the age of 17!