While there is little action on the hill at Stormont, there was plenty across the road in the stunning Stormont Hotel on Saturday night. ProKick’s East Belfast homecoming was a sold-out affair and a stacked international fight card set the pulses racing for those lucky enough to get a ticket. Top of the Bill & crowd favourite Cathy McAleer, floored Polish champion Ciaskowska in the third to win by KO. 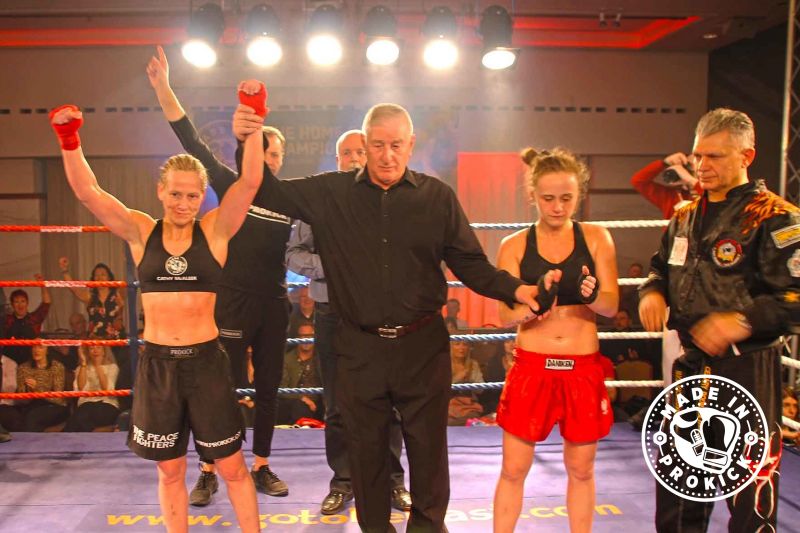 Cathy McAleer Wins By Ko over Polish champion Ciaskowska i

The ProKick Saturday Fight-Night got under: James Braniff kicked the show off with a rematch against Wolfpack fighter Krill Egan. These lads had fought in November in Athlone with Egan taking the win, however this time at home in Belfast, ProKick’s young gun James took the win. It currently sits at one a piece between these two teenagers, with a deciding trilogy set to take place.

East Belfast’s own Joshua Madden faced Carlow’s Ben Slattery as both boys put on a masterclass of control and discipline. Fighting under light contact rules, well experienced referee Bob Hunter commented on the level of self-control and technique displayed by both young fighters. He was too close to call and the judges gave the decision as a draw, as the crowd were left mesmerised by the skill of these two young men.

Completing triple J, it was time for a gentleman of the gym to step between the ropes; Jay Snoddon. He faced a young Polish champion Filip Nowak over two rounds. While Nowak displayed a few impressive spinning kicks, Jay’s relentless style and tired his opponent quickly. After the final bell rang, the judges’ decision was clear – a win for ProKick’s young gun Jay Snoddon.

As always, a ProKick show provides opportunity for many novice fighters to take on the challenge of making their debut in front of a home crowd. This was the case for Rachael McCartan and David Rose. Both newbies showed grit and determination, fighting all the way to the final bell. Rachel took the win against Lincolnshire’s Amy Oglesbee while the judges couldn’t split David and his opponent from Dungannon Wayne Bell. What a way to make your debut!

ProKick’s Matthew Kerr made his kickboxing debut in Malta back in October with an impressive points victory. Having one fight under his belt, Kerr was now set to fight in front of friends and family against Bryan Bitter from the famous Yamabushi gym in Switzerland. Bitter wasn’t unnerved stepping into Kerr’s home terrority, giving everything across three rounds. The fight again came down to the judges’ decision and it was ProKick’s Kerr who had his hand raised in victory once again.

A longstanding rivalry existed between the next competitors; Wolfpack’s Jade Molloy and ProKick’s Grace Goody.  These two first met in June 2016 in Newtownards when the judges couldn’t split the two fighters. In November 2017, Grace travelled to Molloy’s hometown of Athlone in search of the Junior Irish Schoolgirls title. Goody got the win and brought the belt home with her to ProKick. Stormont was the setting for Molloy seeking revenge and she certainly had the bit between her teeth. The girls went toe to toe over three rounds, in an incredibly close fight. This time the judges again were unable to split it and the decision for this teenage trilogy was a draw.

Rowena Bolt faced two-time National kickboxing champion Kerry Doyle from the Top-Pro Gym in Carlow for the WKN All Ireland Championship 53kg division belt. From the first bell, both ladies set out with a fast flurry of attack. Bolt hemmed Doyle into the corner at the end of the second round and after an onslaught of punches, the referee gave Doyle a standing count. The third round began in similar fashion, this time a kick seeing Doyle caught in the ropes. Referee Bob Hunter had seen enough and stepped in to end the fight much to Doyle’s dismay. It was clear for all to see the devastation Kerry felt, yet she showed the utmost respect to raise the new WKN Irish Champion’s hand in victory – ProKick’s Rowena Bolt. 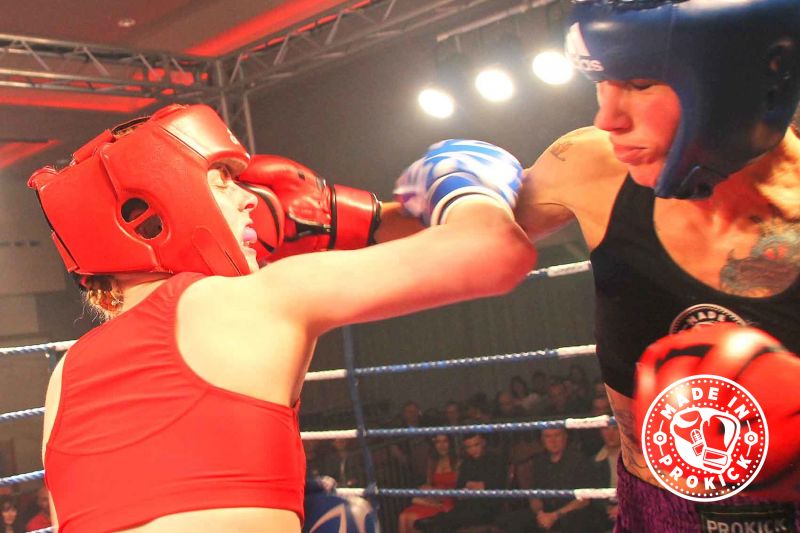 The penultimate fight of the night was another rematch, this time between Polish fighter Patryn Klak and ProKick’s adopted Iranian Salman Shariati. Both had met before in May 2017 in Zawiercie, Poland when Klak took the win. This time around Salman had something to prove, and not just when it came to fighting. Across three toughly contested rounds, both fighters showed great skill and resilience, Shariati led with his body and head kicks, while Klak drilled in heavy low leg kicks. By the time the final bell arrived, the judges deemed the two warriors unable to be split with both hands raised in a draw. But the action didn’t end here for Salman, his girlfriend Anna was called to the ring, and in perhaps his most nerve-wracking moment of the night, he got down on one knee and proposed. The crowd erupted in cheers and with no pressure…she said YES! Congratulations to you both from all at ProKick.

As if that drama wasn’t enough, the main event of the evening was still to come! Crowd favourite Cathy McAleer agreed to fight her Polish opponent, Martyna Ciaskowska who weighed in 3.5kg overweight. Never one to back away from a challenge, McAleer entered the ring with the roar of her home crowd. The opening round began with both trying to suss each other out, there was an obvious respect between the two fighters. Ciaskowska looked dangerous with her kicks, however the undeterred McAleer kept her cool, and got in on the inside driving in body shots and knees. In the second round, McAleer stepped the power and pressure up another level and Ciaskowska couldn’t handle it. Referee Bob Hunter stepped in and stopped the fight, with Cathy taking her first professional win in front of her multitude of fans.

A thrilling night of action filled with debuts, an Irish title win and an engagement, you can be sure that ProKick’s East Belfast’s homecoming will be remembered!

A massive thanks to the Stormont hotel, & to all our sponsors, promotion & helpers team, the WKN, all our travelling teams home and abroad, coaches judges and you the fight-fans. 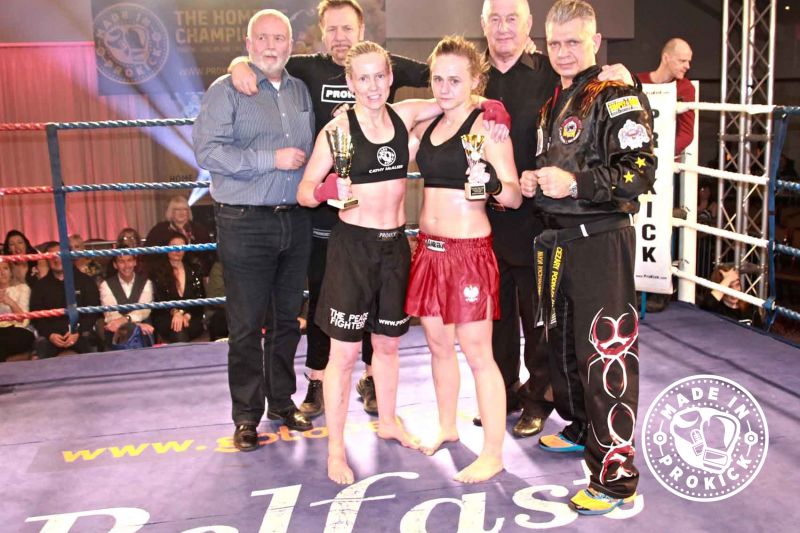