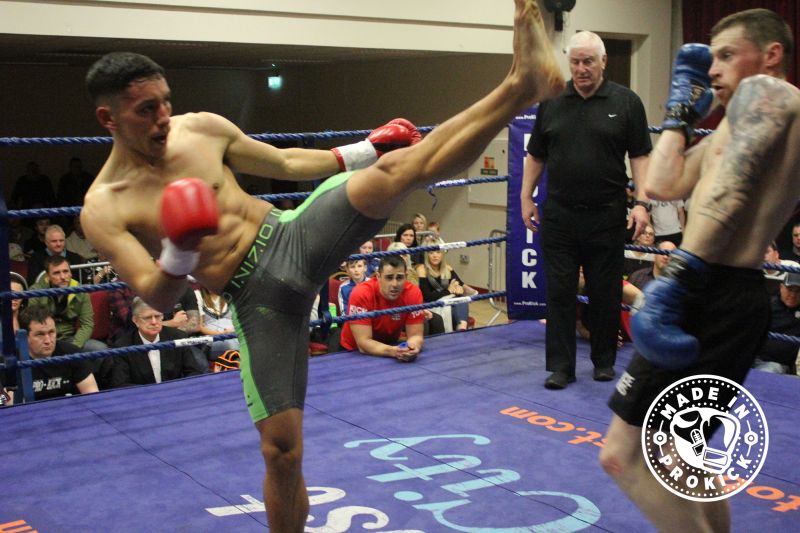 At the ProKick promoted Ards event, Kids as young as six years old had the opportunity to climb through the ropes in a well controlled light contact kids event. A big thanks to Darren Dougen & the Golden Dragon club for supporting the event. Photographs & Video up-loaded soon.

Straight into the four Full-Contact bouts with first up with:

WKN - Low-Kick Amateur rules. 3x2 min rounds - match made at 68kg and both fighters came in at 66kg Jake McCreedy WINNER Points (Belfast,NI) Vs Courtney Vella (Malta) This was a hard fought fight with both boys wanting the win by showing high-level skill, fitness and power. Jake's fitness came to the fore as Courtney tired in the final round. Well done boys, nonimated best fight of the day.

Next up was the Prokick’s adopted Swiss son, Killian Emery, he went head-head with Maltese fighter Aiden Borg Catania. These two tallented power houses both looking for a knock-out.   WKN - K1 Style Oriental Amateur rules. 3x2 min rounds - with the pair weighing in at 65kg each -  Killian Emery WINNER on Points (Swiss) Vs Aiden Borg (Malta)

The only title on the card and it was for the WKN championship of Ireland featured in the welterweight devision 67kg under Full-Contact rules scheduled over 4x2 rounds Michael Swann WINNER 4th round KO (Belfast, NI) Vs Cathal Dunne (Athlone, IRE) What a fight with with Dunne forcing the fight from first bell,  Swann knocked down in the 2nd by a right hand and taking a count from the Ref Mr Bob Hunter. In the third Dunne with the perfect game plan against the bigger taller man worked in the inside not giving Swann a second to get into his stride.  Going into the fourth and final round Swann needed something big as he was clearly behind on points in this fast yet competitive match. Half way through the round - 'BOOM' and right out of the blue a spinning back fist and that was it!  A dramatic turn around with the referee called the doctor Mr John Doherty in immediately, thankfully Cathal was back on his feet and okay. A big shout-out and thanks to Leon Parsons and the #TeamWolfpack for travelling to the event.

Down fighter, female World Champion, Samantha Robb was never in any real trouble throughout the match but the guttsy Polish fighter Remeiska made the match competitive. It wasn't until the final round that Robb found her range and looked like she could win inside the distance, but Rembeiska hung in there right to the final bell. Well done Poland's Dominika Rembelska and thanks to the WKN in Poland and former WKN world champion Cezar Pedraza.

Demo bouts 1x1 Minute Round - Plus round Robin