SAVE THE DATE! - THIS SUNDAY on 25th September will be the inaugural and historic first fight show in the brand new state of the art ProKick centre of excellence. The upstairs kickboxing area will be transformed into an iconic fight arena with the ring moved into the middle ready to be surrounded by you, the fight fans! DOORS OPEN 2pm First bout 2:30pm 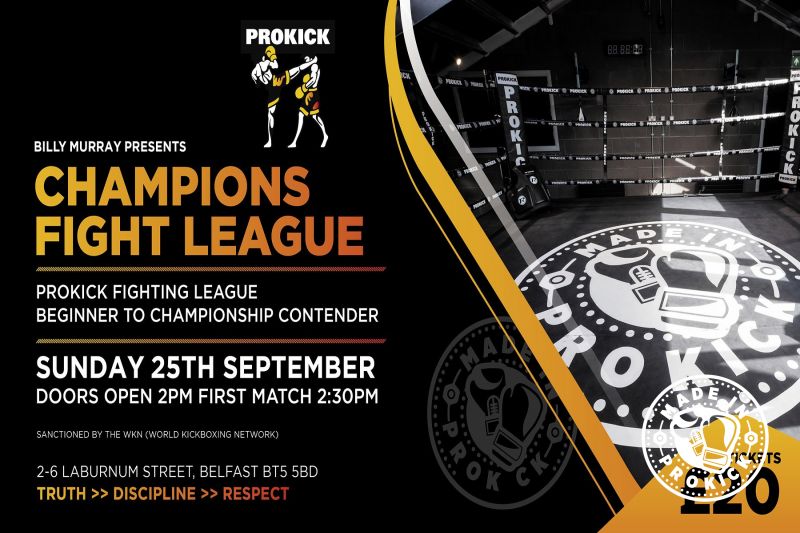 25th September will see the inaugural ProKick event at the New Gym - this event sees the beginning of a monthly fight league that will see ProKickers compete with different clubs from Ireland, the UK and Europe each month.

Champions Fight League will hit Belfast on the Sunday afternoon of September 25th 2022 - You will see many familiar faces such as current WKN British and International K1 Champion, Jay Snoddon, along with many of our new up and coming fight team ready to go through the ropes.
DOORS OPEN at 2pm first bell sounding at 2:30pm.

There will be plenty of our kids taking the opportunity to put all their training into practise as they step into the square ring under the ProKick PeaceFighters banner.

So put the date in your diary, Sunday 25th September, and every subsequent last Sunday of the month as we kick off the ProKick Fight League. Who will rise to the top and crowned champion at the end of a year-long competition? There’s only one way to find out - get your tickets and be there!

This inaugural event sees the beginning of a monthly fight league that will see ProKickers compete with different clubs from Ireland, the UK and Europe each month.

We’ve all heard of the Champions League but let us introduce you to the Champions Fight League. This international kickboxing league sanctioned by the WKN will take place each month in Belfast’s ProKick gym. Competitors from across Ireland, UK, Europe and beyond will go toe to toe to finish top of the league.

To buy a seat to this inaugural event “the ProKick Champions Fight League” the hottest ticket in town is real easy........

Names of anyone who has purchased a ticket will be at the door of the event.

MORE ON THE MAIN EVENT