Darren McMullan's return to the ring didn't go according to plan as doctor calls a halt to big fight before the fight really kicked-off. Just seconds into the opened round and after McMullan was down with a left hook the doctor Mr P McGurk called a halt to the fight not with the knock-down but with a nasty cut which was opened up over the left eye - melting the IceMan's return to the ring at the Stormont hotel in Belfast. 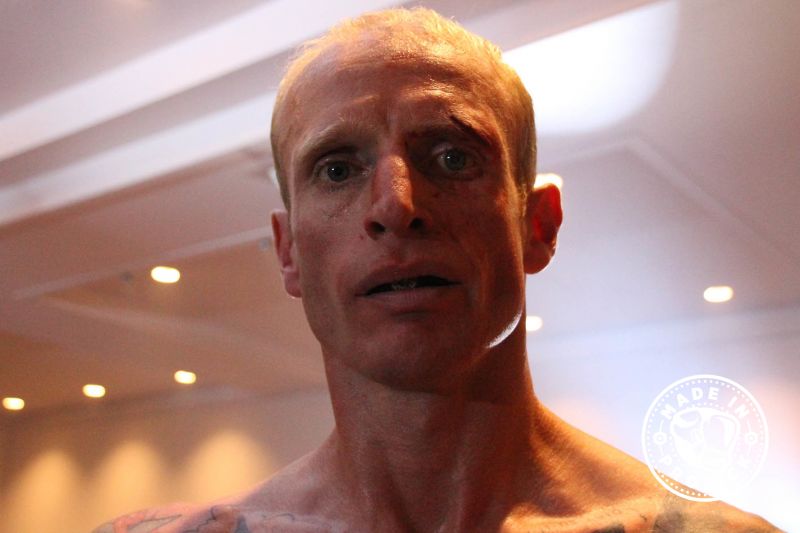 Not the way we planned it but that's the Fight-Game. Said promoter Billy Murray
"I'm so gutted for Darren, he didn't even get started again't Nikolas Konstantinou of Cyprus. Darren is a slow starter and takes a bit of time to get into a fight but the fight was over before we even knew it. That's what makes the fight-game so exciting, you can never tell which way a fight will go. Murray added,
On paper that had the makings of a great fight and I'm sorry for Darren that the fight ended that way."

Darren said right after the fight, I'll fight again next week if he was allowed, and added his disappointment the way the fight ended also. Then he congratulated Nikolas Konstantinou. 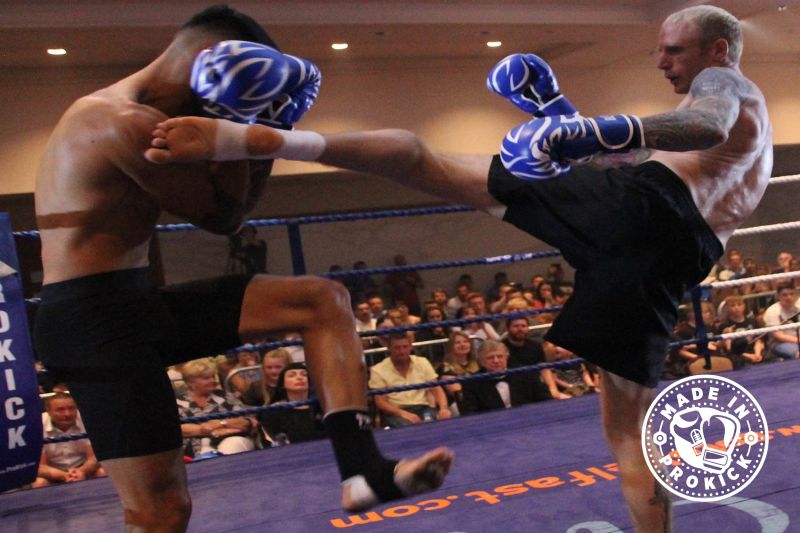 Darren McMullan (NI) kicks out at Nikolas Konstantinos at their match at the storming hotel on Saturday 30th June.

The WKN man in Cyprus Mr Chris Christodoulou immediately offered a rematch for Darren in Cyprus set for this September. A spokesperson for ProKick said; "Not sure that will happen as the IceMan is planning to head back down-under."  Watch this space for more. 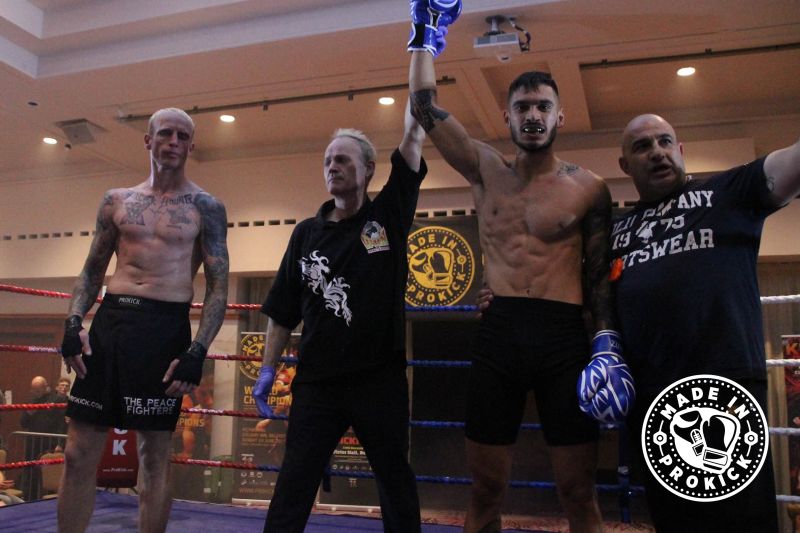 The Semi main event with Rafa Del-Toro (Gran Canaria) and Stefanos Stamatiou (Cyprus) lived up to the billing as fight fans were treated to a masterclass in kickboxing. Rafa took the fight on a unanimous points victory over the tough 3 x 3 minute rounds. 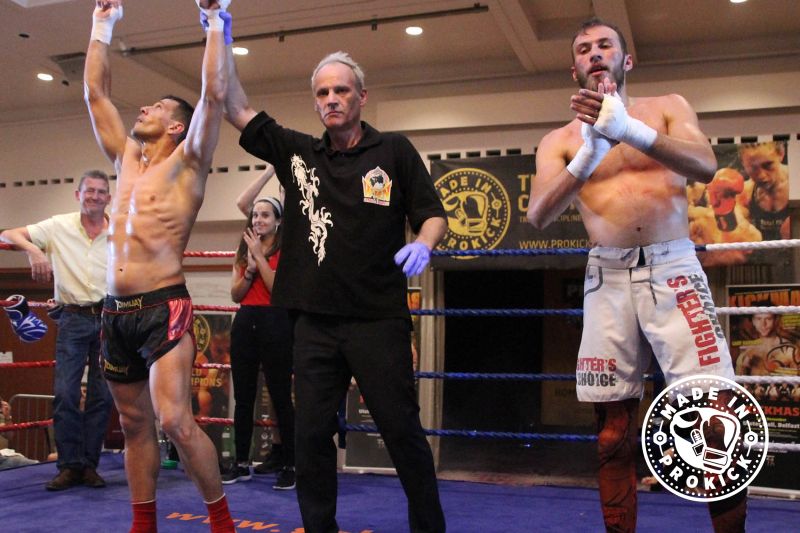 Rafa Del Toro Wins - The Semi main event with Rafa Del-Toro (Gran Canaria) and Stefanos Stamatiou (Cyprus) lived up to the billing as fight fans were treated to a masterclass in kickboxing.

One of the most hotly contested bouts on Saturday's fight-card was between two former protagonist; Rowena Bolt Belfast and Schembri from Malta. The pair met back in November 2017 in Malta. when Malta played host to 50 Northern Irish ProKickers in a big International kickboxing weekend. Rowena lost on a split decision over the 3 rounds under low-kick rules.
This time the match is over 4 x 2 rounds and there is everything to fight for - The WKN Flyweight amateur International kickboxing crown.

This female fight was a barnstormer right from the first bell with no girl wanting to take a backward step. Rowena had the edge on aggression and on the sheer volume of punches & kicks landed.

Before the 4th and last round was to start, the doctor was called to the Maltese corner, and after inspection the doctor asked for the fight to be stopped, due to a bad cut over the left eye of Diane Schembri

And the NEWWW rung-out all over the venue as Rowena was declared - the new WKN champion.

Brining up the rear was, Matthew Kerr, and the talented teens Jay Snooden, Joshua Madden. Another newbie went through the ropes for the very first time, Welshman Reis Davies who managed to split the judges and get a draw. 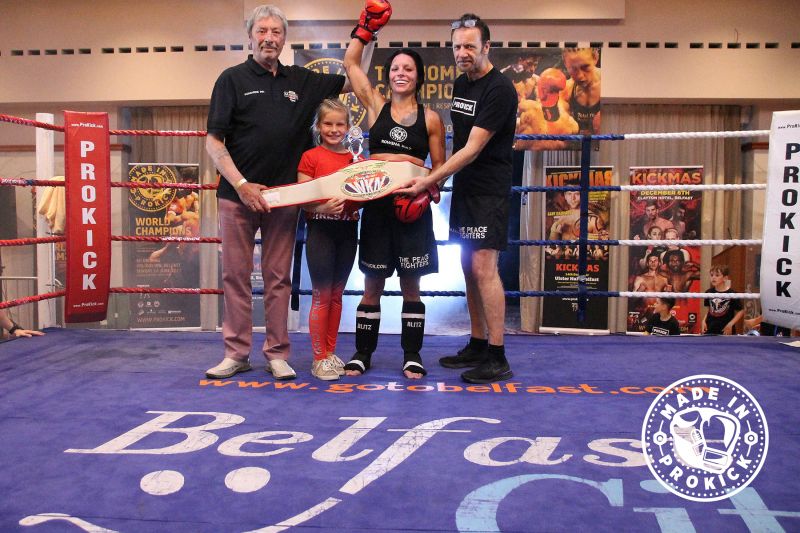 A Big Massive shout Out to:

All the travelling gyms

All the ProKick team who helped on the show

Robert Masterson for referring and standing in at the last minute.

All the backroom staff who helped on the show.

The WKN who sanctioned the event

Finally, to our loyal fight fans for attending the our ProKick home shows.