McAleer Vs Dehby in France

Cathy McAleer is now in Saint Raphael, France. With just hours to go before the weigh-ins, Mac is on weight, Belfast's WKN world champ had a light breakfast. Pictured below, Cathy met Team Noel from Malta when out walking. Now Cathy is resting before the press conference and weigh-ins at 4pm GMT. 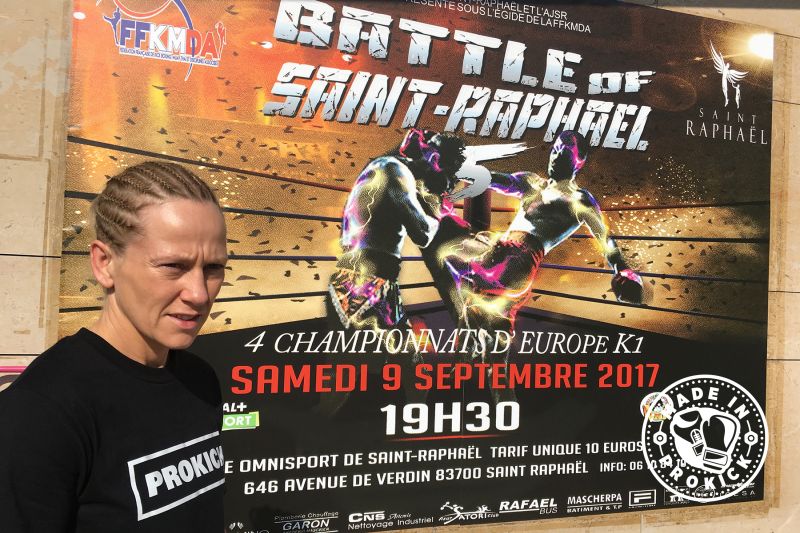 Cathy In France outside the venue in Saint-Raphael

Cathy McAleer takes the next step in her kickboxing journey with her first professional fight after Amel Dehby’s initial opponent, Meryem Uslu of Germany pulled with an out injury. Writes, Aimee McKee. Despite McAleer being the current amateur WKN 54kg world Full-Contact champion, McAleer is not be the bookies favourite against France's multiple world professional champion Amel Dehby.

However, the Belfast kickboxing Karate Queen, McAleer, is not phased by the challenge, Cathy won’t let the odds deter her and hopes to return home to Belfast as the winner before her next quest in Girl Power on the 13th October in Bulgaria. Grabbing the opportunity with both fists, Cathy will fight 26 year old bantamweight kickboxing champion Amel Dehby this Saturday evening September 8th in Nice, France.

The match is made under full K1 style rules and is over 3 x 3 min rounds with the match made at 57kg.

A big thanks to the WKN Mr Cabrera for setting the fight up. And a massive thanks to promoter / manger Mr Badri Rouabhia of AJSR Saint Raphae

Cathy McAleer recently featured on the hit BBC series TrueNorth in KICK-ME - there she spoke about how she was bullied at school and how her father introduced her to karate which led to a life-long study in fitness, later becoming a two-style Martial Art world champion, in karate and then in kickboxing and with no signs of hanging-up her boots just yet.