Results Battle of the Celtic Nations

The ProKick team returned to Fraserburgh in Scotland for a two Nations Celtic challenge which took place on Saturday July 9th 2022. Topping the bill was an all-Celt affair for the British WKN 64kg K1 title between Belfast's Jay Snoddon and Fraserburgh's Shane Weir. It was a lively start by the tough Scott, Weir - but it only took Snoddon into the second round of a scheduled five before his game-plan came into affect as he chopped the legs of Weir. 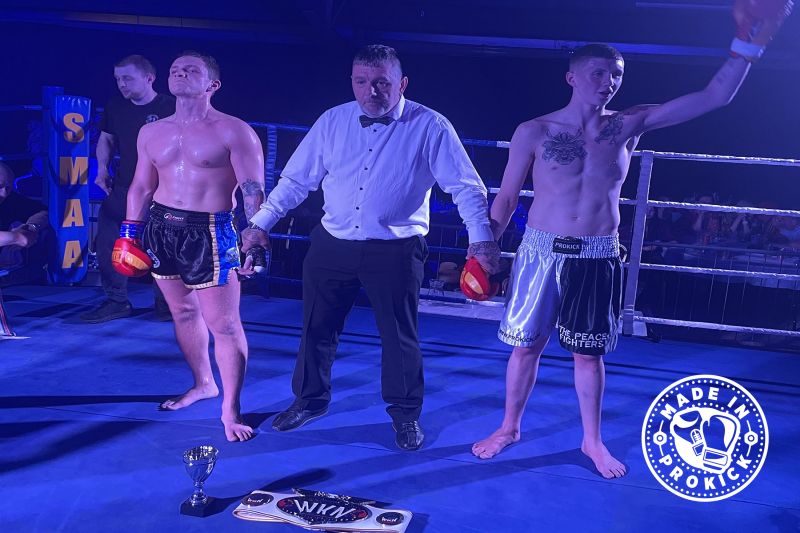 Jay Snoddon is the New WKN 64kg champion - It only took into the second round of a scheduled five before Snoddon's game-plan came into affect as he chopped the legs of Scotland's Shane Weir.

The fight ended in the second round: At the start of the second round the Dunonald kickboxer scored his first knockdown with a barrage of vicious leg kicks. Scottish Referee Gary Langford, called a halt to the match when he intervened after another series of devastating kicks to Weir's leg dropped him again to end the fight.
'And the new' rang out across the area as Jay Snoddon was declared the New WKN kickboxing Champion.

There were a total of 18 ProKick fighters who all took part in this CLASH OF THE CELIC NATIONS. With ages ranging form 8-years of age to 46 years young.

More on the rest of the fight card later, and especially on the return of K1 Eastern Japanese champion James Braniff.

Results in Brief:
Light Contact Low Kick Bout 3 x 1.5 Minute Rounds
Scott Buchan VS James Braniff (Friendly)
Scotland’s Celtic Nations show had another Big surprise on the fight card. Fight-fans witnessed the return of one of N,Ireland’s most promising talented teenagers, Holywood’s James Braniff. James was on a meteoric rise in the world of kickboxing - winning national and International Japanese kickboxing titles as far away as in Japan. Then back in September 2021 when he won the WKN British title his world came to a dead-stop as he needed to take a backward step and time-off due to medical and health reasons. Now the young sales person is back after a light-contact demonstration bout on Saturday night ….. and he loved every punch ’n' Kick ……..watch this space for more

Zuzi, one of only two female ProKickers, made her way to Scotland to step through the ropes for the first time. The 13 year old ProKicker came up against a feisty Scottish lass who was relentless but Zuzi didn’t back down and comes home with a credible debut performance.

Max was hoping to celebrate a victory in the ring along with his 13th birthday. A dominant first round saw Max work clinically behind his jab. His opponent came out fighting in the second and third while Max showed great ringcraft and footwork evading a lot of what the young Scot had to throw at him. Unfortunately for Max, the judges valued the pressing style of the Scottish fighter and gave him the win. Max has a lot to be proud of as he impressed all of the ProKickers there and watching at home with his smart and technical performance.

One of the youngest ProKickers to travel and compete in Scotland was young Lucas Davey, this was his first fight and he gave it everything with a smile on his face at all times. We’re all looking forward to what’s next for Lucas after his Scottish debut.

Leo stepped into the ring confidently following his previous dominant performance in his debut fight in April. Harper had the support of the crowd behind him and pushed Leo hard in the first round. After a few words of instruction from coach (and grandad) Leo came back out in the second and third round landing more combinations while his opponent began to tire. The fight went to the judges decision and ProKick’s Smith Jr was delighted to get his hand raised in victory.

As the eldest member of the ProKick team, Louis stepped up to make his debut at 46 years young. Demonstrating that there’s no limits unless the ones you put on yourself, Louis was pumped up and gave his all not letting his younger opponent rest. When asked how he felt after his fight, his response was “great fun” which reiterates the satisfaction that many feel getting into the ring no matter the result. What a memory made for Louis! Well done!

Before even stepping in the ring, Richard had already claimed the title of Biggest Loser having lost close to 50kgs since his time in ProKick. His fight was another step towards his fitness goals. Richard’s opponent just outworked him over the three rounds and the judges gave McGregor the decision.

Adam demonstrated great technical skill and ringcraft during his three rounds as he kept his opponent from getting any of his combinations and shots going. He dominated with his low kicks and impressed all of the judges by taking the victory. His delight was evident as his hand was raised and he came home with a gold medal and well deserved win.

Alex stepped in for his second light contact fight and after a slow start in the first round, got behind his jab and used his round house kicks to offer home favourite Buchan a more difficult challenge in the latter rounds. Unfortunately for Alex, the young Scot had caught the judges’ eye more and he took the win.

Adam came up against a tough opponent who came out fighting from the first bell. Jackson struggled to get on the front foot against the barrage of kicks and punches that were coming his way. The young Scot, Ironside, landed a number of hard hitting punches, head and leg kicks towards the end of the first round that dazed Adam. Coach Billy Murray decided that Adam had seen enough and called the fight off before the bell rang for the second round.

An all action affair between these two saw some great skill and athleticism on display. Both young men in the early stages of their kickboxing journey, demonstrated excellent technique and grit that made this a feast for the fight fans present. ProKick’s Sloan had a strong first round behind his jab and using the knee, however, McDowall came back in the third round to land the more clinical shots and swaying the judges decision in his favour.

Scotland’s Birnie came out of the blocks like a whirlwind but that didn’t worry ProKick’s Campbell. He remained composed and used his footwork to evade well. Pierce landed right roundhouse kick after right roundhouse kick to the young Scots body across all three rounds which slowed Birnie down considerably. Pierce’s display for his second fight was intelligent and technical showing great promise for his future in the sport.

The second of the ProKick female warriors stepped into the ring following her debut in April. Iga took the centre of the ring throughout the majority of the fight and showed a wide variety of techniques to gain the judges’ approval. Unfortunately, she threw an illegal spinning back fist in the first round which saw her issued with a warning from the referee. With the adrenaline pumping and all to fight for, Iga threw and landed another spinning back first in the third round which meant that she was deducted a point from each of the judges’ score cards. There was very little time left to make up that difference and in the end the Fraserburgh favourite, Reid was declared the winner.

Full Contact Low Kick Bout 3 x 2-minute rounds 72kg
Joshua Kingham VS Gary Lynch (Winner)
The last few months have been busy for Gary with fights in Belfast, France and now Scotland. Coming off a disappointing performance in France due to a last minute rule change, young Lynch was determined to show what he’s capable of. Both fighters were keen to win the battle of the clinch and land the knee on the inside, but Lynch quickly realised this was smothering his other work and got back to basics behind his jab and landing low kicks. This made all the difference and in the end Gary outworked and out powered his opponent, taking the win unanimously on the judges’ cards.

Full Contact K1 Bout 3 x 2-minute rounds 76kg
Jordan Strachan VS Adam Braniff (Winner KO 2nd)
It’s been a long time since Adam has been in the ring but for anyone watching they would never have thought it. A composed first round saw Adam feeling out his opponent, gaining his distance and trying a number of combinations and shots to see where he would find most success. That success came fairly quickly in the second round. Strachan threw a looping right hand and Braniff countered quickly with an incredible jumping knee that left the Scot on the canvas. As the referee began the count, he took one look at Strachan and called the fight off with ProKick’s youngest Braniff taking a wonderful win on his comeback. He’ll certainly be one that fight fans will want to keep the eye on.

Full Contact K1 Bout 3 x 2-minute rounds 73kg
Alex Alderson VS Dan Braniff (Winner)
Following his two younger brothers, Dan stepped up against Alex Alderson in a repeat of his debut fight in April. Dan has taken the win on home turf and this time Alderson wanted to prove his worth in front of his home fans. But Dan had other ideas. Working confidently and efficiently, Dan displayed a much greater variety in his combinations and answered back everything that the Scot had to throw at him. After another three rounds between the two, it went to the judges again. The result? A repeat. A hand raised for Dan Braniff. What a night for the Braniff family.

Full Contact K1 Bout 3 x 2-minute rounds 94kg
Scott Falconer VS Sammy Balogh (Winner CSF 3rd)
This heavyweight contest was another repeat from ProKick’s ProspeX show in April. Then the judges couldn’t split the two, but those in attendance were treated to a real spectacle in a heavyweight slogfest. Learning from that fight, Sammy didn’t get involved in a dogfight, instead he utilised both his hands and feet and in particular chopped away at Falconer’s lead left leg. The heavy kicks were causing the Fraserburgh fighter problems and slowing down his attack on Balogh. As the bell rang for the end of the second round, Falconer limped back to his corner and couldn’t make it back off the stool for the final round. A victory for Sammy and ProKick!

A massive thanks to all our team, backroom staff and supporters who made the effort to travel along with the team on this whistle-stop-tour.
Pictures: Iga Ptasinska & Farrar Von-Stringfellow
Words: Karthryn Warren & William Bruce