The #ProKickteam were in Fraserburgh, Scotland on Saturday night for the Predator Strike Wars. The ProKick team of five traveled to Mr Albert Ross & Fraserburgh Fitness centre fight-night. Five ProKick fighters went through the ropes, they were as follows: 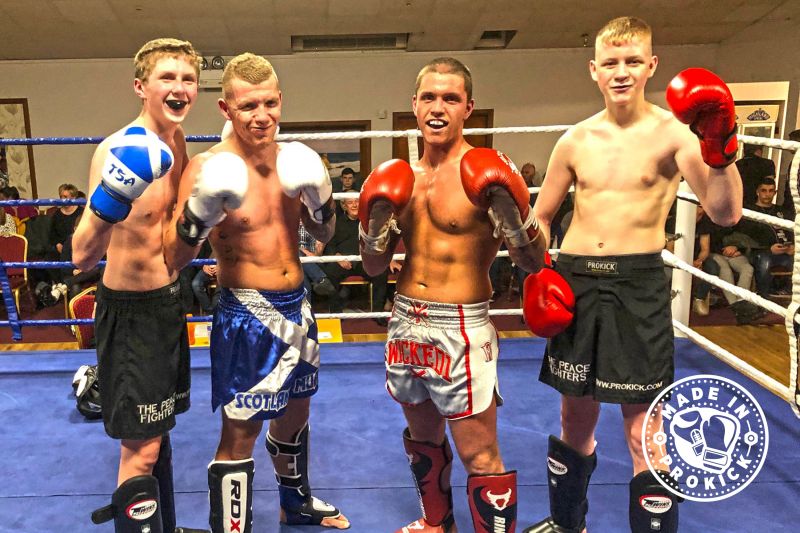 ProKickers James Braniff and Jay Snoddon faced Shane Weir and Mikey Sheilds of Scotland in an all action highly entertaining, yet a competitive exhibition of kickboxing.

ProKickers James Braniff and Jay Snoddon faced Shane Weir and Mikey Sheilds of Scotland in an all action highly entertaining, yet, competitive exhibition of kickboxing. The fab four had the audience cheering for more when the final bell rang.

Fight No 5 on the evenings programme, was between local man, Norbert Pieztreck (Fraserburgh) he faced Jonathon McIlveen (ProKick Belfast)

Winner in the 2nd round was Norbert Pieztreck (Fraserburgh). The corner stopped the fight. Well done debutants.

Time for another exhibition fight this time between local hero Douglas Morrison (Fraserburgh) - he faced Johnny ‘Swift’ Smith of Bangor, Northern Ireland. This match was over 3x2 minute rounds and under K1 rules.

The bout was clean with both men displaying great technical control and showing why they are at the top of their game. The audience loved it.

This match was part of Douglas Morrison’s preparation for his return to the ring - where, when and who will be released in the coming weeks.

The last ProKicker to go through the ropes on the night was a new comer to ProKick, AliReza Ekhtiyari (formally from Iran). This was his first K1 fight however Alireza has had a little Kung-Fu experience in light-contact. Alireza faced William Stewart (Fraserburgh) William had some fight form with kickboxing & MMA. This match was under K1 rules and over 3x2 minute rounds.

The fight started the same way as it finished, full of high kicking fast stylish non-stop action from the first bell to the sound of the final bell. And at the end, it was down to the judges. It was a close decision read the MC…and the winner is, William Stewart - as the roof lifted off the Fraserburgh leisure complex.
After the fight, ringsiders said that it was the best and most exciting fight of the night.

Well done Leon’s fighters from Wolfpack in Athlone, South of Ireland - they came away with a win and a draw. Well done guys.

A massive thanks to Mr Albert Ross and co-promoter Shane Weir & team for the invite to attend the event. Great job!

Pictures from the event