A Feast of Fists and Feet: Stormont Hotel Belfast

Saturday’s fight action in Stormont showcased the array of talent developed in the ProKick gym; from the youngest fighters at 9 years of age, to the terrific teenagers right up to the experienced Johnny Smith topping the bill. 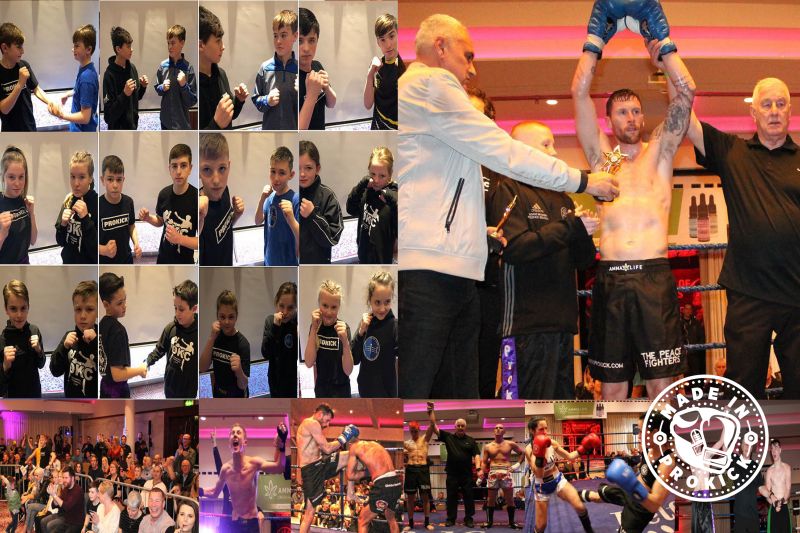 Saturday’s fight action in Stormont showcased the array of talent developed in the ProKick gym; from the youngest fighters at 9 years of age, to the terrific teenagers right up to the experienced Johnny Smith topping the bill.

The afternoon was packed full of kickboxing kids who all did exceptionally well. For some, this was their first time stepping through the ropes to compete. Others had some experience behind them, but for most it was their first ‘home show’. The level of skill on display from all the clubs was fantastic and it was wonderful to see the respect that was shown from each competitor. Any tears that were shed, simply reminded the audience how much this sport means to the young kickboxers.

If the afternoon’s event was the starter, the evening show was certainly a mouth-watering main course!

Right from the first bell, the action was non-stop. Novice ProKick fighter Cameron Scott opened with a thrilling two rounds leaving his opponent gasping for breath as the final bell sounded. This was quickly followed by another two young novice fighters from the Golden Dragon Gym in Magherafelt and FightClub Dublin going head to head. This was six minutes of fast paced action, with both young men giving their all. Jack Molloy’s hand was raised as winner, but both fighters gave the audience lots to cheer about.

Then came the turn of ProKick’s teenage stars. Joshua Madden was first in and faced TopRing’s Callin McElhinney. Not to be outdone by what had gone before, these two continued the action with a frenetic pace and a determination to win. After the full on three rounds, Madden’s hand was lifted in victory. Again, it was ProKick vs TopRing as Camryn Brown took on Bayley Spragg. Both young men displayed talent and strength throughout. After three rounds the judges couldn’t split them and it was declared a draw.

Stepping into the ring as the first female of the evening, , Rowena Bolt took on the Italian Maura Scano in a low-kick style match. This was a cagey affair as the two ladies looked to counter, however Bolt lived up to her ‘Lightning Bolt’ name and picked up the pace to gain the victory. Keeping with the girl power theme, teenager Grace Goody competed in her first K1 style bout against Cyprus’ Papadopoulou. The Cypriot was more experienced in the K1 style hurting Goody with knees to the body in the first round, however Goody got back to her game plan by the final round and launched multiple low leg kicks that caught the eye of the judges and got her the win.

Following a brief interval, ProKick’s rising star, Jay Snoddon took to the ring to face another Cypriot, Nikolas Charalambous in a K1 match. Charalambous started quickly with strong kicks to Snoddon’s body, however the ProKick star soon settled into the fight and displayed a range of shots that slowed down his opponent. After the final bell, Jay’s hand was raised in victory and he celebrated with as much vigour as he had fought!

It was then time for the return of ProKick’s adopted Swiss son Killian Emery. Following a serious motorbike accident last June, it was uncertain whether Killian would be able to fight again. Shane Weir, a talented Scot, was his opponent as they fought under low-kick rules. Fight fans were treated to a wonderful display as Emery showed all his technical skills but with a seemingly new found strength. He perfectly executed half turning kicks to Weir’s body and head which floored the Scot three times. After the third, referee Bob Hunter waved the fight off and Emery’s comeback was sealed with a win. It is safe to say that this young man won’t let anything stop him.

The penultimate fight of the evening involved another Swiss fighter, this time Thomas Poullain came up against ProKick’s Matthew Kerr in a full contact contest. Kerr’s jab was working well for him in the first round, establishing distance but also hurting Poullain. At the end of the first round, Poullain landed a jab of his own which caused some damage to the outside of Kerr’s right eye. The fight was a close one throughout the final two rounds, but with Kerr struggling with his right eye, Poullain managed to control it a little more with his kicking game. After the final bell, it was another victory for the Swiss.

Onto the main event. This was the icing on the cake, the cherry on top for fight fans in Stormont Hotel. It was time for Johnny ‘Swift’ Smith to take on Cyprus’ Christos Venizelou in a K1 professional match. A quick spinning back fist from Smith in the opening round stunned Venizelou, however the Cypriot had clearly come to end Smith’s undefeated professional record, as he attempted to hamper Smith’s style by holding and using the clinch to avoid Smith’s renowned leg kicks. Smith stayed focused and began to take advantage on the inside with the knee and body shots. During the final round, Smith sprung from the floor and landed a knee, cutting Venizelou under the left eye, he maintained pressure on the Cypriot right until the final bell sounded and once again Johnny ‘Swift’ Smith had his hand raised in victory.

Thank you Kathryn Warren for the summary of the event