Jay Snoddon a teenage Pro-Kicker will go between the ropes next weekend when he features in his first K1-style Full-Contact kickboxing match against an experienced advocate of the sport from Cyprus. Snodden will face Antreas Rousogenis over 3 by 2 minute rounds Rousogenis who fights along side the team UpperCut in Cyprus. 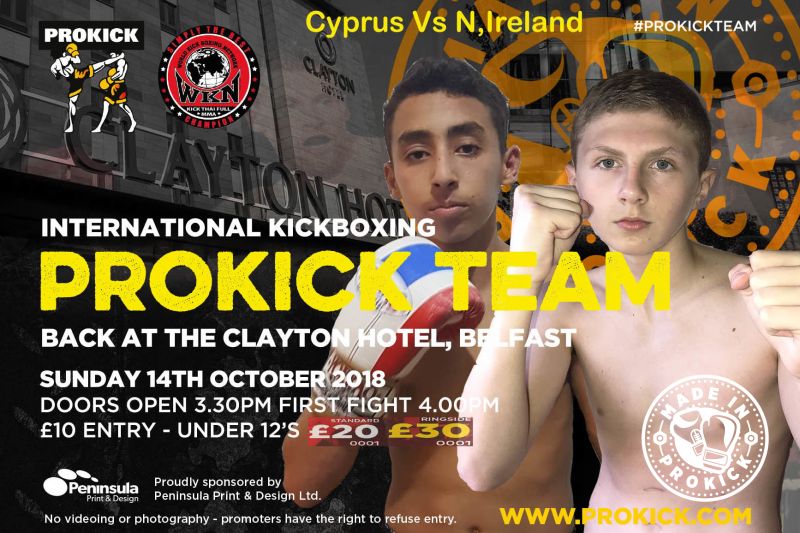 Rousogenis, fights alongside the top team 'UpperCut' in Cyprus. The young 15 year-old has had 6 fights under kickboxing K1 rules and will weigh-in at 52kg and will visit Northern Ireland for the first time.

The teens will compete alongside some of Belfast's kickboxing elite in an International event, dubbed, ‘Back at the Clayton’ in Belfast on Sunday October 14th.

ProKick's other teenage high kickers on the card are: Grace Goody, James Braniff, Camryn Brown, & Joshua Madden will all support #JohnnySwiftSmith as he tops the bill at the Clayton Hotel on October 14th.

"The event is shaping up to be a good show, said, Billy Murray. So make sure you get your tickets now to avoid disappointment, and come out and support our/your team."

Tickets are on sale now, priced £20 for STANDARD seating with limited RINGSIDE seating left at £30.
ProKick kids are at a knock-down price for... FREE - children must wear their ProKick uniform be accompanied by an adult.

Our young PeaceFighters will also make an appearance at the International event at the Clayton Hotel. See pictures from the last event with - ThePeaceFighter