Johnny ‘Swift' Smith will challenge for the WKN Super-Welterweight World Kickboxing title on June 6th at the Stormont Hotel in Belfast. The title has recently been vacated following French kickboxing legend Bruce Cordon’s retirement, Cordon has over 120 fights to his credit. WKN World President Mr. Cabrera confirmed that Bangor man ‘Swift’ Smith has proven he is the number one contender for the title and the World Kickboxing Network will nominate his opponent within the next couple of days. The WKN Super-Welterweight title will be contested at 70kg with 5 x 3-minute rounds of K-1, right here in Belfast. 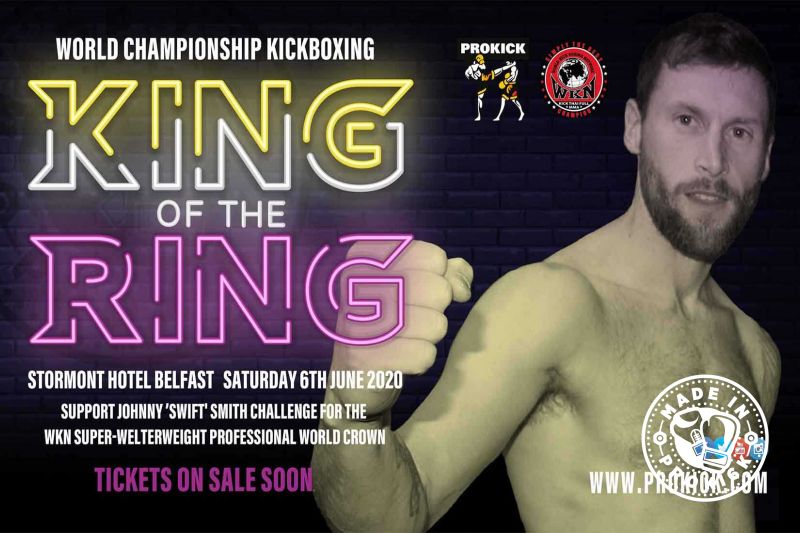 In June 2019, ‘Swift' Smith made his intentions clear as he took the WKN K-1 Intercontinental crown from Korean fighter Jihoon Lee in the 4th round by TKO. Smith, then put his newly won title on-the-line and in October 2019 he faced another Asian fighter, this time, a Japanese fighter, Shuhei Sone. It was Swift by name and nature as Smith stopped the Japanese fighter in the 2nd round. These two fights were a clear indication that ‘Swift’ Smith had one target in mind; the world title. The WKN certainly sat up and took notice, granting him his first professional world title shot.

This next fight for Smith will be his 10th professional match with six of those wins coming by way of knockout. Smith, the site engineering manager at Calor Gas, also held the WKN amateur world crown and amassed an amateur fight record of 23F 17W 4L 2D.

The Saturday fight-night special at the Stormont Hotel in Belfast will see old favourites at ProKick all move up a level to produce another great supporting undercard for this World Title show.