What a feast for fight fans on a cold January afternoon! Jay Snoddon put on a masterclass to defend his WKN European K1 Featherweight title against a tough Sardinian opponent Damiano Vacca. 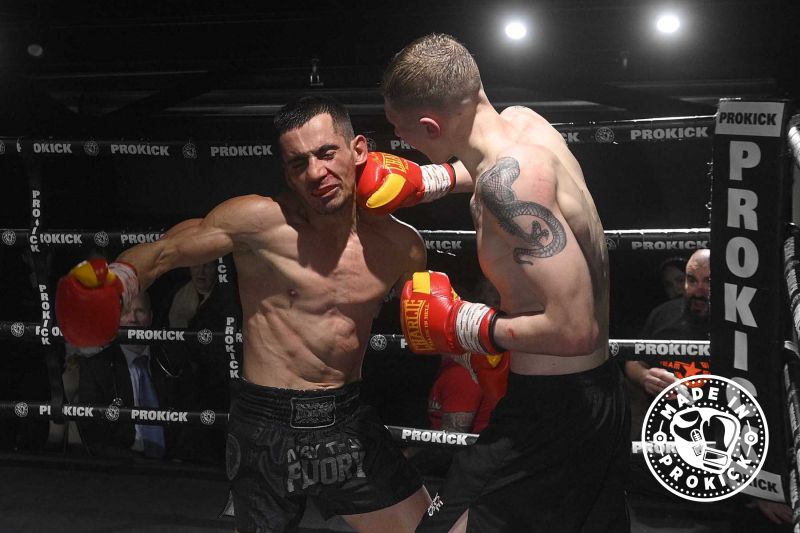 Snoddon troubled Vacca half way through the first round with an onslaught of body shots and a beautiful jumping half turning kick that landed flush to the liver resulting in a standing count from the referee just on the bell. Valiant Vacca came back out for the second round and Snoddon continued to punish him with body shots, this round though the Sardinian wasn’t flinching.

Round three, and Snoddon moved from attacking the Sardinian’s body to chopping away at his left leg with the low kick and a multitude of punches sandwiched either side of the kicks. For most of the third round, Vacca was on the back foot and credit to the Sardinian, he heard the sound of the bell at the end of that round when many thought he wouldn’t.

Round four and Vacca came out with the bit between his teeth knowing that he needed to get on top. Snoddon kept pursuing his left leg causing his challenger to switch stance to try and protect it. Another round full of action and plenty of grit on display from both fighters.

Fifth and final round began to the roar of cheers for hometown hero Jay Snoddon. As if fuelled by the cheers, Snoddon took off into another gear, putting together his work to the body and the chopping low kick causing the referee to issue another standing count to Vacca. Capitalising on his opponent’s struggles, Snoddon threw a roundhouse kick to the body and then another to the left leg crumpling the Sardinian. He couldn’t make it up from the count therefore crowning Snoddon as reigning and defending European champion, by way of knockout, much to the delight of all his supporters there to see it.

A successful defence of his European title means Coach Billy Murray will be asking WKN about a world title shot for Snoddon in the very near future. Stay tuned to ProKick to find out more!

There were 8 other fantastic action-packed fights with results below. Well done to all the fighters from Golden Dragon, Top Pro and ProKick for knocking out the January blues in Belfast on Sunday

If you missed out on it, you can purchase the live stream for £4.95 here until Thursday at 3:30pm then send a Facebook request to....

Get ready for our next show - A FIRST - 4 brothers on the one card…the Braniff bros; oldest brother Nathan, will be making his debut, youngest brother Adam will be back in the ring, Dan, chomping at the bit after an unfortunate tooth abscess meant for medical reasons he couldn’t fight today and finally, James, coming off a strong win today, will defend his WKN European K1 title for the first time after winning it in Belgium in November. BROTHERS IN ARMS - Sunday 26th February 2023.