ProKick's Fight-Club was a roaring success and it marked the anniversary of coach Billy Murray becoming a professional world kickboxing champion, all on the same night only 33 years ago​. ProKick’s Fight Club in Belfast today (12th September 2021) produced a flurry of action that resulted in two new champions being crowned in the new home of kickboxing. 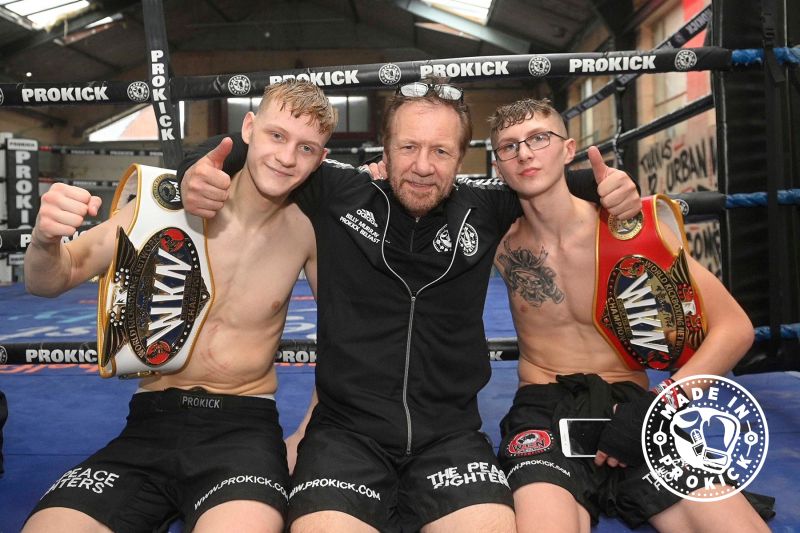 Jay Snoddon, the young ProKick Samurai, stepped into the ring against Justin Pace, from Malta. During a tight first round, both fighters were taking their time, analysing their opponent and setting their range. However, Snoddon finished stronger with punches landing and and unsteadying Pace as the bell sounded.
The Maltese fighter came out in the second round displaying a lot of variety with his kicks, although Jay kept his cool and evaded them, countering with punches, with another round that demonstrated his strong boxing skills.
In round three, Pace continued with a range of shots, this time throwing a spinning back first that shaved the side of Snoddon’s head. Pace tried it again, this time miscalculating his distance and landing illegally with his forearm causing Snoddon’s nose to begin bleeding.
Not to be deterred Jay came out calm and composed in the fourth and landed copious knees to the young Maltese’s stomach. The two young fighters grappled together in the clinch throughout and towards the end of the round ProKick’s Jay Snoddon began to land a few knees to the head which left his opponent looking to his corner for support.
As the bell rang for the fifth and final round, fight fans erupted in expectation as both fighters came out giving their all seeking to be crowned WKN International Featherweight K1 champion.

Both young men had put on a great show for the crowd and eagerly awaited the decision from the judges. With his hand raised, Jay’s dream had become reality, he was crowned the winner. An emotional Snoddon, had the belt fastened around his waist, realising all the months of hard work, dedication and sacrifice were worth it.

A long awaited contest between ProKick’s James Braniff and Wales’ Joshua Embradrua kicked off with the Welsh fighter demonstrating great technique and skill, slipping Braniff’s punches. Using his height and reach, Braniff stayed on the outside and began to work his way in with low leg kicks.
Embradrua was warned twice by the referee for holding Braniff’s leg and as round two began this continued. The referee was left with no choice but to deduct a point from the Welsh fighter. James got back behind his jab and landed some strong shots but they were immediately matched by Embradrua coming back with heavy kicks and punches of his own.
Following the point deduction, Joshua came out strongly at the beginning of the third round with a range of high and low kicks making their mark on Braniff. However, just before the bell sounded for the end of the round, he landed a straight right hand that unsteadied his Welsh opponent.
Onto round four…Braniff began by attacking Embradrua’s lead leg with a bout of chopping low leg kicks. This began to cause the Welsh man problems again and once again he began to reach for James’ leg to counter the kick. The referee issued a number of warnings again and mid-way through the round deducted another point from Joshua Embradrua.
The fifth round saw two tired young men go toe to toe and kick for kick in the Battle of Britain. Leg kicks and knees were traded back and forth with Braniff then changing levels and connecting with a strong left kick to the head.

A close and technical fight showcased just some of the kickboxing talent that is blossoming across Britain right now. The judges had the final decision on this one and they crowned ProKick’s James Braniff as the new WKN British Lightweight K1 champion. His hand raised victoriously, Braniff eyed his new belt and a huge smile broke across his face as he was given what he has worked tirelessly for over the last year and a half.

Kickboxing is back and with a bang in Belfast. There’s definitely no way you could keep the first rule of Fight Club with all the action witnessed today. ProKick has two new WKN Champions and at 18 and 19 years old, both Jay and James are only getting started.

A massive thanks to all who helped out in setting up and running the event today.