Belfast’s Matthew Kerr plans to keep his unbeaten record when he faces Shane Weir for a second time at #BillyMurray ProKick event at the Clayton hotel on October 14th. Kerr pipped the tough Scott Weir on a close points verdict back in June this year at the Stormont hotel. This time there is a greater prize a stake, the Light Middleweight WKN Celtic Nations crown. 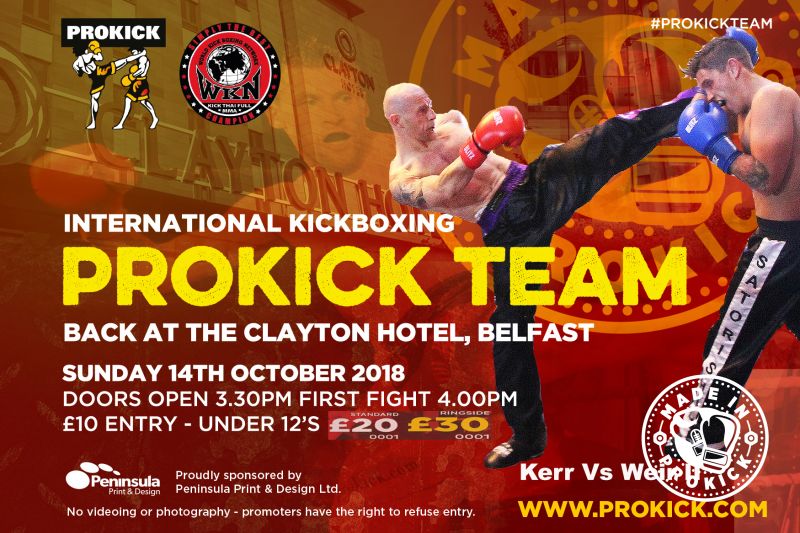 Matthew Kerr Vs Shane Weir II - is now for the Celtic nations Championship at the Clayton Hotel in Belfast. All set for 14th October 2018

Matthew's record, now 5-0 will battle over 4x2 minute rounds under Full-Contact kickboxing rules against Fraserburgh’s Shane Weir. Weir has a respectable record 5-1 with Shane’s only defeat to Kerr, and now Weir who has redemption on his mind to even the score. This all-Celt affair will see the pair battle it out to find out who is the Celtic Nations WKN champion.

The main event on the Sunday afternoon show at the Clayton Hotel will see the clash between #JohnnySwiftSmith (Bangor) and Periklis Filippou of Cyprus. Filippos is a 22 year-old Muay Thai champion with a fight record of 13-1 with Smith 4-0 as a professional. The match is made at 70kg and will be over 3 by 3 min rounds under full WKN K1 style rules.

Our young PeaceFighters will also make an appearance at the International event at the Clayton Hotel.
See pictures from the last event with - ThePeaceFighter