There are very few who will last the course from the novice/enthusiast to Black Belt and that goes for any Martial Art. Here we have FIVE of ProKick's finest with close to 50 years experience between them (Pictured) the FAB FIVE are undergoing a final intensive week-long test challenging them in so many different aspects of the Sport/Art. 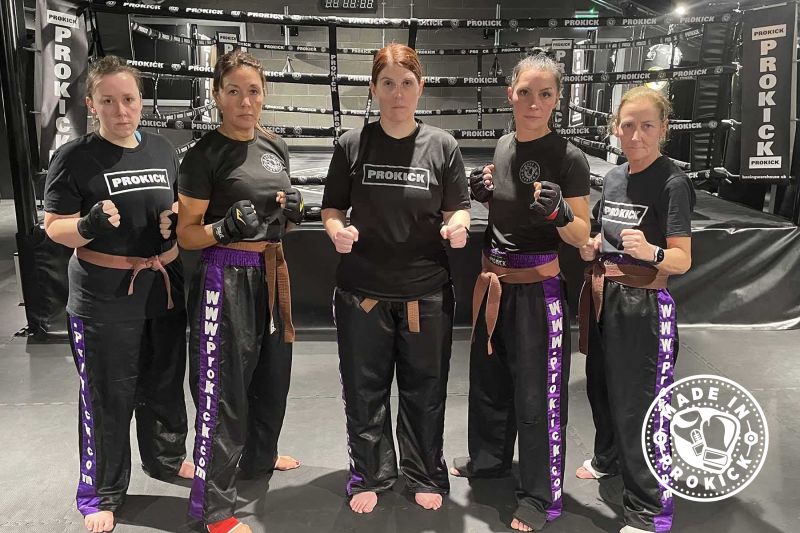 Ruth Anderson, Amanda Garett, Kathryn Warren, Rowena Bolt and Sarah Stewart all seniors ProKick members are under-going their final week-long intensive training regime in preparation to achieve one of the highest honours in Martial Arts - 'Black Belt'. A Black Belt represents an achievement through years of dedication and commitment. It symbolises hard work, self-discipline, and perseverance, physically and mentally

Monday - grading practice (COMPLETED)
6.00pm - 6.45pm - YELLOW Belts - the team joined in the class to recap and teach different aspects
7.00pm - 7.45pm - Advanced beginners, no seniors The same for this class, it was back to basics.
8.00pm - 8.45pm - fourth week of a Brand New Beginners course
The team underwent tasks within all the classes.

Tuesday - 6.00pm - 6.45pm - (COMPLETED)
The team participated by instructing and sparring alongside the Kids, this seemed difficult for some of the team. This will be readdressed on Saturday 17th
7.00pm - 7.45pm -
Back in the groove, the team were on practicing their syllabus in their senior class
8.00pm - 8.45pm -
This section our Five Brown belts had an individual small group of Adult orange belts. Working through the Green Belt syllabus
One of the FIVE took the warm-up and took a good class. Instructing in class situation will help understand why the technique works. Note, just because our ProKick members are senior brown and Black does not make them a coach. This is a totally different journey for our ProKick students.

Wednesday - (COMPLETED)
6.00pm - 6.45pm -Private Purple belt and above session
The team were joined by a few purple and 1st Brown members looking more clarity on what is required for their grading at the weekend. The team recapped on some self-defence techniques and break-falls.
7.00pm - 8.00pm - FIGHTER CLASS.
Sparring in the fighters class is different from normal sparring on the floor in a syllabus class, the team were mixing it up with real competitor. The team spent some time in the ring with young up-n-coming prospects.

8.00pm - 8.45pm - Beginners Sparring
This was a different class of the team, it was the end of a five-week beginners sparring course and the team all had the chance to spar on a LIVE broadcast to our private FaceBook page.

Details of what the team accomplish tonight (Friday) 16th Dec will be posted later.

Friday - (COMPLETED)
6.00pm - 6.45pm
ADULT SPARRING - three of the team finished their rounds in the ring with two others finishing 5 x2 Min rounds off on Saturday. A fresh ProKicker was in every round.
7.00pm - 7.45pm PADS CLASS - the team took part in the hardest class of the week - All the squad held the pads for most of the class as they showed their ability to coach.
7.00pm - 7.45pm - A quick de-brief and to lay the plan down for Saturday morning.

This will be up-dated daily>

10am - the team had separate groups and helped with pre-Grading, instructing
11am - The same as above our five Brown belts help out in a higher level Kids Class.
12pm -12.30 Black Belt syllabus testing
1pm - Sparring - all have now completed the sparring sessions along with a 5x2 min round each with a fresh ProKicker every round, other ring-craft drills.

The team have done well all week, it has not been easy and nor should it be. It's been an emotional rollercoaster for most, both mentally & physically, the Team are on their last DAY tomorrow on Sunday 18th December 2022.

Below was their final schedule:

An amazing end to an amazing year at ProKick. Congratulations to all those who belted up on Sunday 18th December at the ProKick Gym in Belfast. The scene was set with our ProKick Kids earlier in the morning, right up to our adult yellow Belters to the new high ranking Purple and Brown belt seniors. There has been a buzz in the gym all week and it was brought to a crescendo with the completion off FIVE New ProKick Black Belts which was unprecedented. Read on>>>>>
Break
10am - Kids Grading, seniors joining in.
Break - 11.30 - 11.45am
The team helped out with the kids as many first timers were going for their yellow belt right up to Ethan Rodgers making the grade for his Jnr brown belt. The Fab Five worked separately in different sections with the kids encouraging them on technical points as they prepared to take their grade.

A big well done to all the kids who were excellent and showed a lot of desire and pride in being a ProKicker today.

11.45 Yellow, Orange, Green, Blue, Purple, & Brown levels
It wasn’t long before the adults started to arrive and the action kicked off at
"This was it. The final hurdle. The grande grading for the ladies."
Everyone took their place on the mats.

Black belts Mr Dobson and Mr Malcolm took their place at the front. The first instruction for all senior grades was to get all their sparring gear on and make their way to the ring. The fab five to wait at the front to filter their way through to spar again against other seniors. They were ready. Tired yet ready. But, there was another surprise. They were done. They had made it.
They had taken the step to black belt.Their brown belts were undone and their new black belts were tied around their waist by Mr Murray with smiles, tears and loud sighs of relief all round. Now, their first job as black belts was to assess those who were there to take their next step on the kickboxing ladder of excellence. 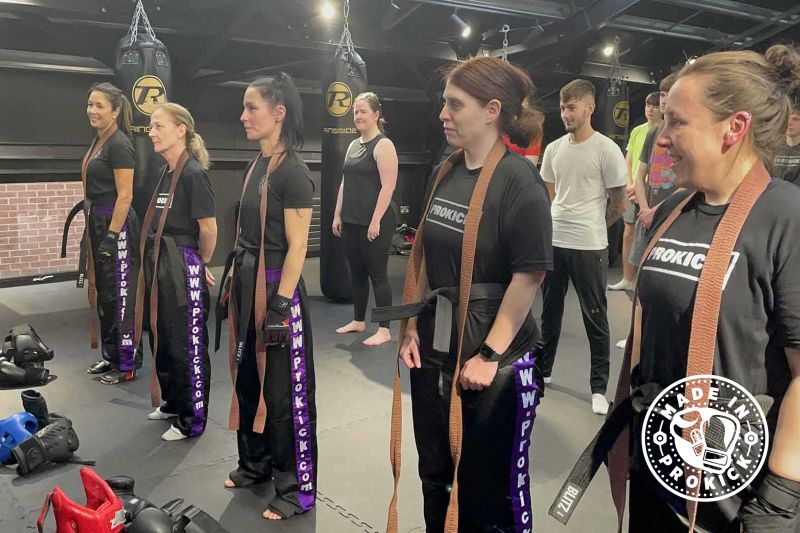 Their brown belts were undone and their new black belts were tied around their waist by Mr Murray with smiles, tears and loud sighs of relief all round.

They were joined by Mr Paul Gordon, another long serving black belt, and at this stage there were 8 black belters sitting on the ring assessing those who had come to grade. No pressure! This is a big part of being a black belt, paying it forward, helping out and supporting the club.

And now we have a whole new quintet of lady Black Belters!