TODAY is fight day for Holywood’s James Braniff as he challenges for the Pro-Am WKN European light-middle weight crown. Last night at the official weigh-in, James hit the scales at 72.4kg with the champion Mauro Veccio coming in light at 71.6kg for the required regulative weight of 72.6kg. 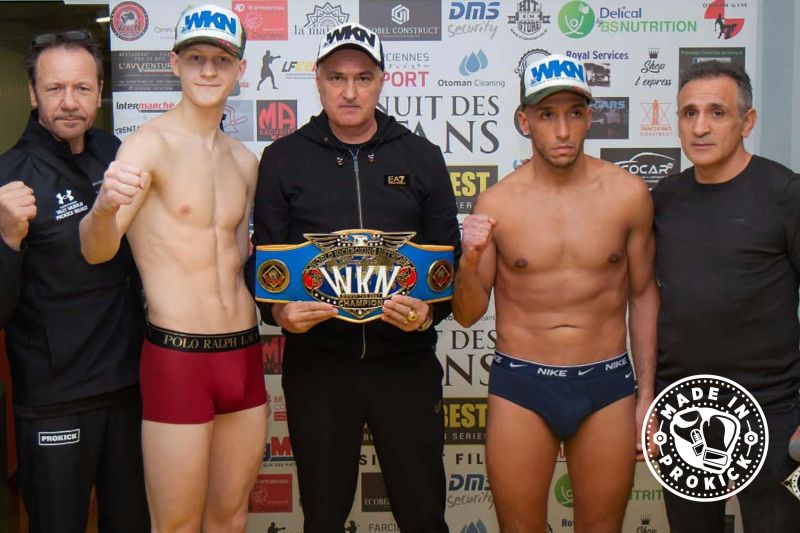 I believe the stars have aligned for James Braniff, said Coach Billy Murray.

“James Braniff had a year out fill with injury which was unrelated to the sport and what a difficult time it’s been for the 20 year-old who has battled through and came out the other side. Just four weeks ago he had an emphatic win over tough Dutch fighter, Baerts, at the Champions Fight League 2 in the ProKick gym. Now he’s challenging for WKN major honours and right in the lions den!

Coach Murray added. I don’t like making predictions, however, I believe we will have a new champion tonight, it could possibly within the distance but I’ll gladly settle for a points victory over the 4x2 minute rounds.

His (James) preparation has been excellent with no let-up from winning last month at the CFL2. The work and help received from his four unofficial brother Jay Snoddon, has been invaluable, every morning working relentlessly on drills and fitness at the ProKick Gym. Not forgetting all his sparring partners and everybody whom have helped along the way - this predicted win is for you all as well.”

Two of James’ brothers are en-route to Belgium to assist and support tonight - Dan the oldest of four and the youngest, Adam who is our camera man. Both are also ProKick fighters.

You will be able to view it LIVE on our private FB page for our ProKick Members only the exact time will be posted later, James will go through the ropes to do battle approximately 8:30 UK time. If you are a current member you will need to request access to the page.

Thanks for the opportunity for the WKN and the promoter, my long-time friend Mr Osman Yigin