Darren McMullan’s top-of-the-bill match is made for the 30th June at the Stormont Hotel. The IceMan will face Cypriot Nikolas Konstantinou over 4x2 minute rounds under K1-Style rules. Konstantinou is the 2017 champion of Cyprus and comes with a 20 fight record. 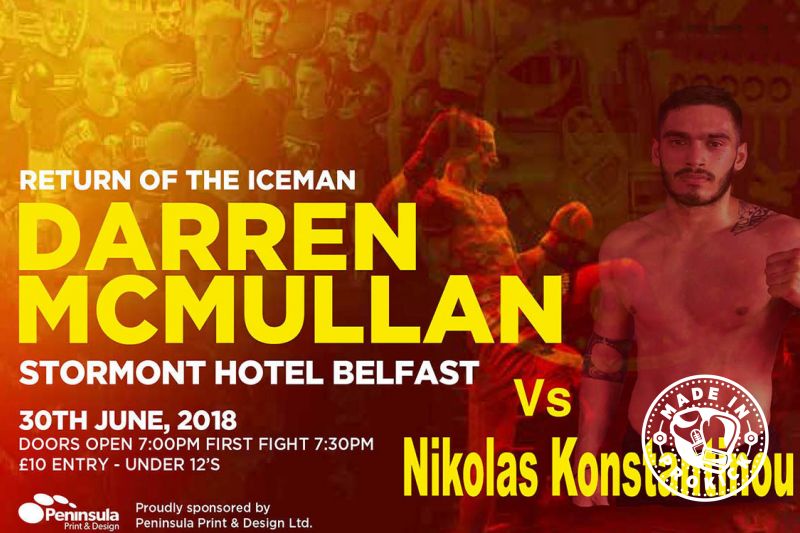 McMullen no stranger to lifting a belt or two himself, he lifted - British, Intercontinental and world championship belts and now hopes to lift the roof at the east Belfast venue before heading back to Australia in August.

An exciting fight-card will be featured as normal at the Stormont Hotel - the semi-main event match will be a professional match over 3x3 minute  rounds with Belfast favourite Rafa Del-Toro from the Gran Canneries and hardened professional Stefanos Stamatiou from Cyprus.

Brining up the rear will be Irish champion Rowena Bolt. Matthew Kerr, Charles Ross, and then the talented teens Jay Snooden, Joshua Madden. Two newbies will go through the ropes for the very first time, Lucy McConnell and Welshman Reis Davies.
One top of that the will be a match between Ireland and Scotland with - James McRobbie (Scotland) Vs Dara Mannion (Galway)

Book your tickets on-line and be in for a free raffle draw on the night for some exciting prices.

Our young PeaceFighters will also make an appearance at the International event at the Stormont Hotel. See pictures from the last event with - ThePeaceFighter