The Lord Mayor of Belfast Councillor Nuala McAllister welcomed the ProKick Kids and the PeaceFighters team to the City Hall on Wednesday evening the 25th April 2018. The team and their parents were invited to talk about they’re work at the ProKick Gym but moreover the recent team trip to Malta. 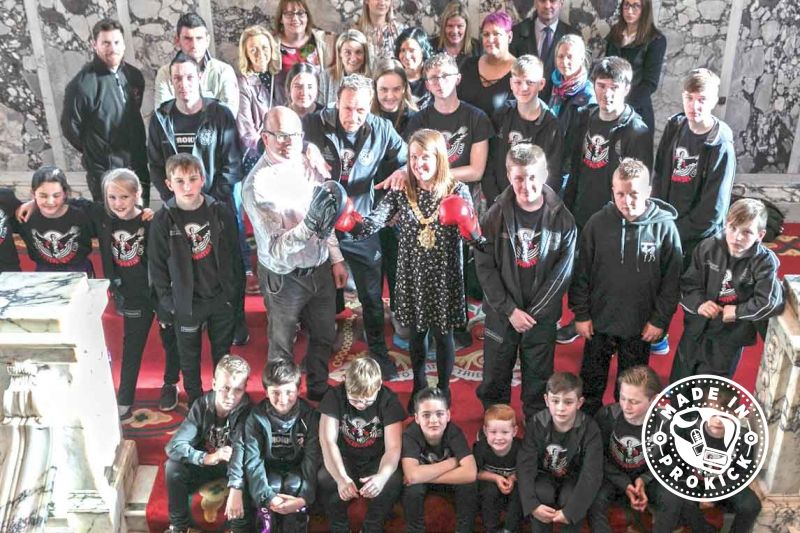 Belfast City Hall Visit for ProKick PeaceFighters - the evening finished off with the traditional group picture on the Grand staircase.

The evening kick-off with an introduction by Cllr David Armitage, quickly followed by a light supper for the kids in the famous City Hall Parlour. And without further ado the Lord Mayor Cllr Nuala McAllister was mingling with the ProKick delegation. Lord Mayor McAllister engaged with the children & their parents showing a genuine interest on how and why they got started in kickboxing and spoke of the importance it is to be involved in sport.

The children were treated to a whistle-stop guided tour of the City Hall by Cllr Armitage then is was back to the parlour to conclude proceedings.

Billy Murray thanked both Cllr Armitage and the Right Honourable Lord Mayor of Belfast Cllr Nuala McAllister for the invitation to the City Hall.
" This means a lot to our club, the kids and their parents to have a little recognition from our City Fathers for the hard work and effort the children and their parents put in, every week rain hail and snow. The group will remember this visit for a very long time to come, the kids had a BLAST.”

The team presented the Lord Mayor with an honouree ProKick Black Belt and a plaque to commemorate the visit the the Belfast City Hall 2018 - and finally, the evening finished off with the traditional group picture on the Grand staircase.