THIS SUNDAY, Save the date! Sunday 30th October will see the return of the ProKick WKN 'Champions Fight League' #2 - the historic first fight show kicked-off in the brand new state of the art ProKick centre of excellence last month. The upstairs kickboxing area will again be transformed into an iconic fight arena ready to be packed by you, our fight fans! 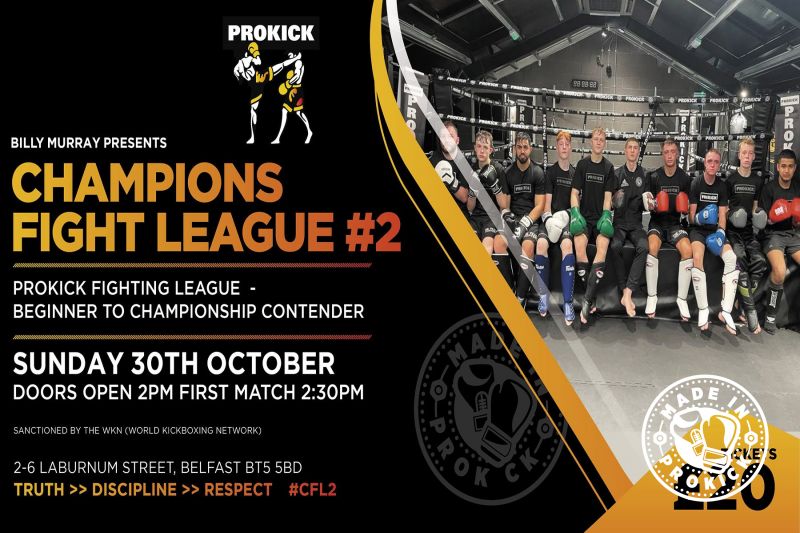 In Belfast on Sunday October 30th 2022 - You will see many familiar faces such as James Braniff the former WKN British K1 Champion, newly crowned European champion Jay Snoddon, along with many of our new up and coming fight team go through the ropes.

In Belfast this coming Sunday afternoon of October 30th 2022 - You will see many familiar faces such as James Braniff the former WKN British K1 Champion, newly crowned European champion Jay Snoddon, will be back in action in a non title match, along with many of our new up and coming fight team all going through the ropes.

There will be a few of our ProKick kids taking the opportunity to put all their training into practise as they step into the square ring under the ProKick PeaceFighters banner.

So put the date in your diary, Sunday October 30th as we kick-off the ProKick 'Champions Fight League' again for a second time in a month. Doors opening 2pm with the first bell sounding @ 2:30pm.

Want to get in on the action? well, there’s only one way to attend and support your team - get your tickets and be there!

Last month’s event saw the beginning of a monthly fight league that will see ProKickers compete with different clubs from Ireland, the UK and Europe each month.

This international kickboxing league sanctioned by the WKN will take place each month in Belfast’s ProKick gym. Competitors from across Ireland, UK, Europe and beyond will go toe-to-toe to finish top of the league.

Secure your spot and seat for the CFL#2 event by purchase your ticket for one of the hottest shows in town just costing £20 - book your seat at the ProKick reception or send £20 to PayPal info@prokickshop.com booking your place. Once you’ve done that, you’ve got your ticket to the 'Champions Fighting League No#2 set for Sunday 30th October doors opened at 2pm first fight 2;30pm.

Here's your Invitation:
Any club, group or individual wishing to compete in Belfast at our events the CFL - then, simply contact Billy Murray. mailto: billymurray@prokick.com or contact me through any of the many social media forums we are are on - call or whatsApp me 07885284409

Would you as a business like to get involved with the ProKick Gym and the CFL by-way of sponsoring a young athlete or a bout on the show? If you want to hear more, simply contact us at the above details.

Exhibition Bout
ProKick’s own Jay Snoddon will hit the ring again, this time against an Iranian experienced kickboxer, Abbas Khorrami in a demonstration bout. Abbas is an Asylum Seeker in Belfast and is the latest to join the ranks at ProKick.

YET TO BE CONFIRMED OR MATCHED:

Gary Lynch Age15 - 72kg. Has 3 full contact fight and lots of light-contact fights. Gary can compete in all styles of kickboxing, Full-contact, Low-kick or K1 style

We have a wide verity of young kids aged from 8-13 years of age requiring matched - Contact details are above.